Ryanair lashes out at Irish government over quarantine for UK travellers

Ryanair has criticised the Irish government’s reluctance to allow quarantine-free travel to the country from the UK amid concerns about a likely more-transmissible variant of Covid-19 first identified in India.

In a strongly worded statement, the low-cost carrier alleges that the government’s caution regarding the variant “amounts to a bogus excuse, when all the evidence confirms that the Covid vaccines are effective against [it]”. 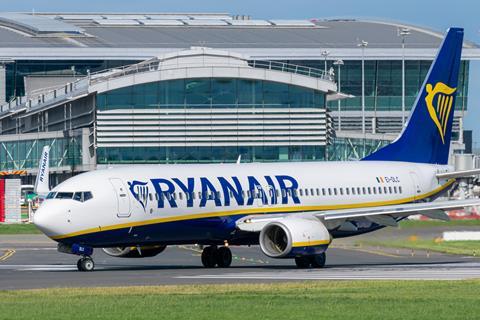 Dublin-based Ryanair is unhappy with its home country’s government

Ryanair highlights the mismatch between UK citizens being allowed to drive across the Northern Ireland border with no restrictions, when arrivals from other parts of the UK by aircraft and sea are required to quarantine.

It also suggests “the Indian variant is as prevalent in Northern Ireland as it is in the UK”.

Ryanair describes the variant as a “scariant”, despite many scientists suggesting that the spread of a more transmissible variant of the disease could overwhelm health services, particularly when vaccination programmes are incomplete.

The carrier calls for the Irish government to drop the quarantine requirement from 1 June.

Ryanair’s concerns stem from Ireland-UK travel being a big pre-crisis market for the operator. Cirium schedules data shows it operated 3,998 flights between the two countries in May 2019, compared with just 140 operating in May this year.

The UK-Ireland Common Travel Area usually allows for restriction-free travel between the two countries and, as Ryanair notes, quarantine is not a requirement for travel between Ireland and Northern Ireland.

Under current rules, however, travellers from England, Scotland and Wales to Ireland are subject to the latter’s strict 14-day home quarantine rules on arrival, while travel in the other direction is restriction-free.

The Belfast Telegraph reported today that the Irish government would be keeping that quarantine requirement in place for the time being, following advice from the National Public Health Emergency Team.

Separately, the Irish government has suggested that it will adopt the European Union’s “digital green certificates” at some point in July, which could lead to a significant return of international travel to and from the country.