Scandinavian carrier SAS is to begin the first direct services from Gothenburg in west Sweden and Aalborg in Denmark to the USA after announcing summer flights from both cities to Newark airport.

The Star Alliance carrier will operate the routes three-times weekly from April 2023 using Airbus A321LR narrowbodies. SAS will deploy the aircraft in a three-class, 157-seat configuration. 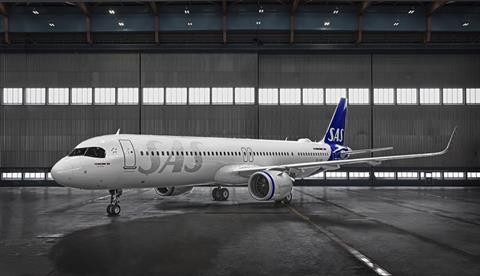 SAS executive vice-president Erik Westman says: “The Airbus A321LR is a slightly smaller long-distance aircraft and perfect in size for servicing the regional markets. Having a comfortable way of travelling with fewer stops to exciting cities such as New York, is something we believe will be highly valued by our customers.”

He says the new routes form part of SAS’s strategy to strengthen its regional offering in Scandinavia. ”We see a demand from secondary cities and are delighted to connect even more parts of the world,” he says.

SAS, which is restructuring under a formal Chapter 11 bankruptcy protection process, has until now served the USA from its home country capitals of Copenhagen, Oslo and Stockholm – with the exception of a briefly-operated service connecting oil industry cities Stavanger and Houston, Cirium flight schedules show.

The Aalborg and Gothenburg flights add to its existing Newark services from Copenhagen, Oslo and Stockholm, while it will also add its first service to New York JFK airport from Copenhagen next summer.

Director of aviation business at Gothenburg airport operator Swedavia, Elizabeth Axtelius, says: ”There is good demand for SAS’s new route to one of the world’s most popular destinations, and this is fantastic news for the region. It is validation of the long-term work that we at Swedavia have carried out together with the hospitality industry and the business community for many years.”