”Southwest is in the process of resuming normal operations after a brief pause in our flight activity resulting from intermittent performance issues with our network connectivity Tuesday afternoon,” the airline says. “We’ve pro-actively cancelled roughly 500 flights due to the outage.”

The carrier provides no further details about the extent of the problem. Southwest’s in-service fleet includes 682 Boeing 737s, according to Cirium data. 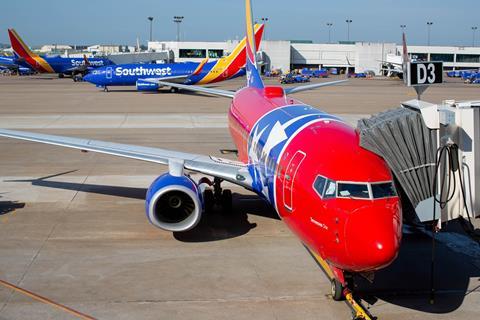 The Federal Aviation Administration confirms it placed Southwest jets under a ground stop.

“The FAA issued a temporary nationwide ground stop at the request of Southwest Airlines while the company resolved a reservation computer issue,” says the regulator.

The disruption comes one day after a weather-information related computer issue grounded the carrier on 14 June.

Passengers stuck in airports and aboard aircraft took to social media to complain about flights being delayed or cancelled.