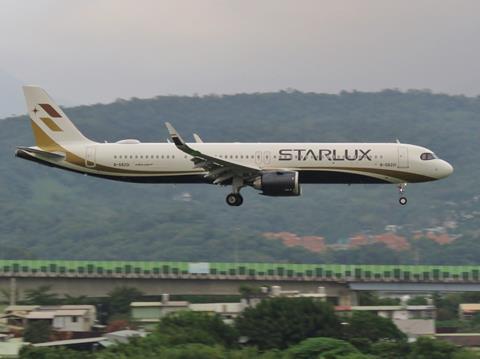 It was due to start Cebu in the Philippines as its fourth destination but the Covid-19 pandemic forced it to rethink its routes and it is currently flying only to Penang and Macau in Malaysia.

The new flights, to Bangkok Suvarnabhumi, Osaka Kansai and Tokyo Narita, will commence in December, the carrier announced on 26 October.

Starlux said it will fly to Bangkok and Osaka twice a week, with flights commencing on 1 December and 15 December respectively. The Tokyo route, also twice a week, is due to commence on 16 December.

The carrier says in a statement that strategic changes are necessary and that it will select destinations with strong demand to fly to as the industry recovers.

Cirium schedules data shows that Starlux has pencilled in Vietnam’s Da Nang from December, although the carrier makes no mention of a flight resumption.