The US Department of Transportation has banned Chinese airlines from flying to the USA from mid-June in retaliation for a Chinese order that US officials say effectively prohibits US airlines from resuming China flights.

The DOT says China’s actions have kept US  from exercising “the full extent of their bilateral right” to operate commercial passenger service between the two countries, according to a 3 June DOT order.

Last month, Delta Air Lines and United Airlines applied to the Civil Aviation Authority of China (CAAC) for authority to resume numerous passenger flights between the countries. The airlines had suspended the routes earlier this year due to the global coronavirus pandemic.

That agency in March restricted flights between China and other nations, allowing foreign airlines to operate just one flight weekly to China. CAAC’s order also prohibited carriers from adding more capacity than they had in schedules on 12 March – a date on which US airlines had no China flights due to coronavirus, the DOT order says.

Traffic between the two countries is governed by the US-China Civil Air Transport Agreement, signed in 1980, which establishes rights for carriers from both countries to provide air transport between the US and China. 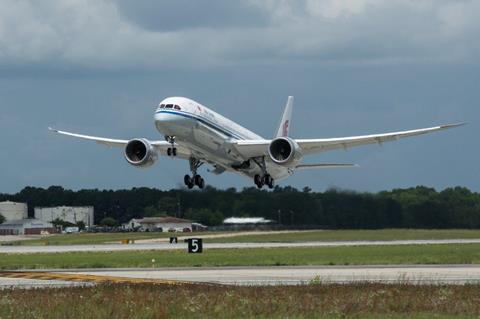 “The government of China has, over the objections of the US government, impaired the operating rights of US carriers and denied US air carriers the fair and equal opportunity to exercise their operating rights under the agreement,” the DOT order says. “Our overriding goal is not the perpetuation of this situation, but rather an improved environment wherein the carriers of both parties will be able to exercise fully their bilateral rights.”

“We conclude that these circumstances require the department’s action to restore a competitive balance and fair and equal opportunity among US and Chinese air carriers in the scheduled passenger service marketplace,” the order states.

The order takes effect on 16 June, the DOT says.

Atlanta-based Delta Air Lines said on 3 June that it “appreciates” the pressure the US government is exercising on China, “to enforce our rights and ensure fairness.” The airline says it applied to begin flying on 1 June but has postponed that date because Chinese authorities have not approved the applications. “Our currently pending application is to begin flying on June 11,” the airline adds.

Chicago-based United says, “We look forward to resuming passenger service between the United States and China when the regulatory environment allows us to do so.”

US airlines’ operations were suspended in March in order to slow the spread of the coronavirus, and passenger demand had sharply declined due to government-issued travel restrictions.

Chinese airlines continued flying a limited schedule between the countries throughout the pandemic. China Eastern Airlines is the top carrier to and from the United States. Air China, China Southern Airlines, Hainan Airlines and Xiamen Airlines also connect the countries.

The DOT adds it “has learned through diplomatic channels” that some of those carriers have been circumventing rules and further distorting competition by declaring numerous flights between the two countries as charter flights for repatriation purposes, when in truth they were normal commercial passenger operations.

DOT says it will review future applications by Chinese airlines for charter flights “with the highest degree of scruitiny”.