Vueling chief executive Marco Sansavini believes the carrier’s moves to exploit new international opportunities that have emerged in the European short-haul market since the pandemic will provide long-term returns.

The Spanish carrier hit breakeven in the third quarter as the airline was able to increase capacity as travel restrictions within Europe began to ease. 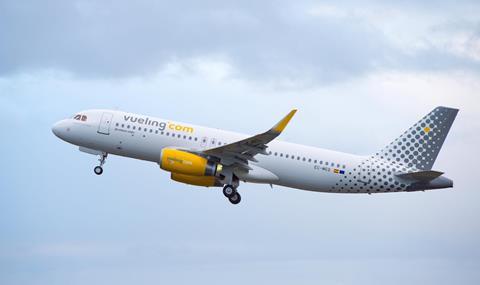 While the results marked the first time it has not lost money since the crisis hit, and outstripped those of its IAG peers Aer Lingus and British Airways, it did not match the profits recently disclosed by the low-cost units of Air France-KLM and Lufthansa.

Short-haul low-cost operators have been the chief beneficiaries of the initial lifting of travel restrictions in Europe and Eurowings and Transavia posted profits of €108 million ($125 million) and €105 million respectively for the third quarter.

“We could have decided to just focus on domestic, and certainty that would have led to a stronger results,” Sansavini said during a third quarter IAG results briefing today, noting these were the first markets where restrictions were lifted.

“Nevertheless we saw opportunities for the 22 new routes we opened in the international market that were related to the fact that competitors were leaving us space in the market.

“That is an investment, and clearly there are restrictions that we have been through during the summer in international markets, in the UK and Italy in particular. So when you compare operators, you need to consider the weight of these two different businesses, domestic and international.

“For Vueling, 65% of our Q3 capacity was international,” he says. “It’s an investment that we make because we believe we have the right cost structure to pursue that in the long-run.”

That international push continues with a major expansion at Paris Orly airport, after the Spanish carrier secured the 18 daily slot pairs being released there by Air France as part of measures to secure regulatory approval for state support during the pandemic. Vueling, which already operates 22 routes largely to Italy and Spain from the French airport, is adding 32 new routes to a range of new European markets.

Sansavini says the move into new markets, many in northern Europe, reflects the specifics of the Paris Orly opportunity rather than a concerted push into these territories.

But he adds: “Through the pandemic we spotted similar opportunities in the north of Europe in particular in the areas where Norwegian was withdrawing, like for instance the Danish flows to Spain. So there are a number of opportunities that are encouraging in this Covid context that are expanding the network of Vueling beyond the original footprint. But we just do it as opportunities emerge.”

Vueling carried just over 7 million passengers in the third quarter, down a third on the same period in 2019. It will lift capacity to around 75% of pre-crisis levels in the fourth quarter.

“The scenario we see for 2022 is one where there are some operators that are increasing and developing, but others aren’t coming back and that generates a number of opportunities that we are targeting at the moment,” he says.