Central European low-cost carrier Wizz Air is to open a four-aircraft base at Rome Fiumicino airport from July.

Wizz will operate four Airbus A321neos from the Rome airport as part of an expansion under which it will open 32 new services. Wizz already operates 25 routes serving Rome, either into Fiumicino or the city’s secondary airport Ciampino. 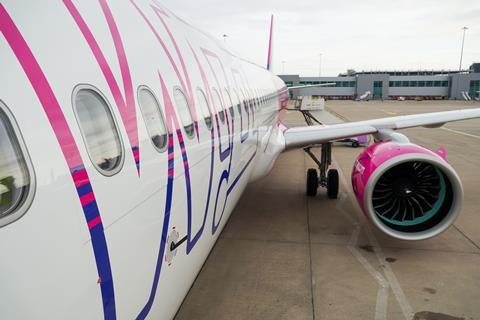 Wizz Air will base four Airbus A321neos at its Rome Fiumicino base, which opens in July

Rome marks the airline’s 43rd base - and the fifth announced for in Italy in the past year. The airline opened bases in Catania and Milan Malpensa last year, as well as Bari in March. It will open a base at Palermo in June.

The launch of a four-aircraft operations and 32 new routes - including 13 destinations currently unserved - at Rome marks the largest of its new Italian bases. Low-cost rivals EasyJet, Ryanair and Vueling already have bases at the airport, while struggling home carrier Alitalia is in the process of being relaunched.

”In the last 12 months we have allocated 17 based aircraft to Italy, and will continue to invest in the market, doubling our presence in the next three years by launching further operating bases and new domestic and international routes.”

Wizz has sought to pro-actively expand since the crisis hit, outlining plans for a number of bases. But its efforts have been hit by the re-imposition of travel restrictions across Europe over the winter to counter the pandemic and it was able to operate only 22% of its planned capacity in April.

Speaking at the recent Aviation Festival event in April, Wizz Air chief executive Jozsef Varadi said he expects Wizz to come out of the pandemic ”a structural winner”, having used the period to expand to new markets.