The National Transportation Safety Board (NTSB) confirms it found an area of cracking and metal fatigue on the CFM International CFM56-7B fan blade that failed during a Southwest Airlines flight on 17 April.

Investigators released pictures of the engine, the Boeing 737-700 involved in the incident and the failed blade, which they say shows metal fatigue near the leading edge of the blade's convex side.

The fatigue area is about 5.7cm (2.2in) long and 1.2cm deep, running "through the thickness" of the fan dovetail, says the NTSB in a 3 May investigation update.

"Fatigue fracture features emanated from multiple origins at the convex side," it adds.

The engine failed during Southwest flight 1380 from New York LaGuardia to Dallas Love Field, when the aircraft was at about 32,000ft.

The NTSB recovered two pieces of the fan blade within the engine, including a 0.3m long piece of "the blade airfoil root that mated with the dovetail".

In addition to the fan blade failure, the engine inlet and cowling separated and struck the wing and fuselage, causing rapid depressurisation, the NTSB says.

Engine pieces significantly damaged the leading edge of the left wing, fuselage and horizontal stabilizer. The incident killed one passenger – the first passenger fatality on a US airline since 2009. 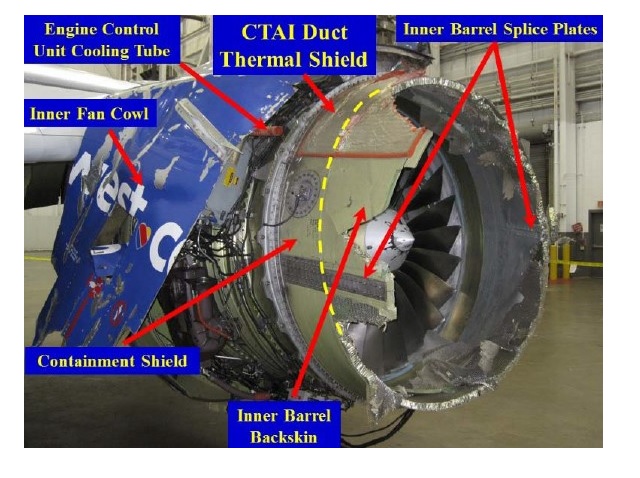 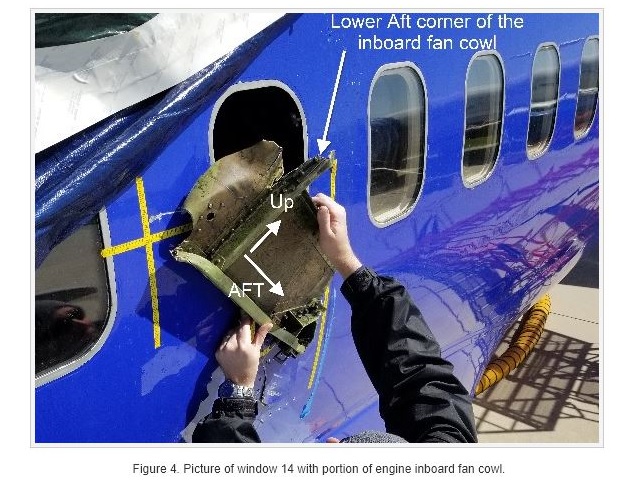 The failed engine's fan blades had been overhauled 10,712 cycles prior to the incident, in November 2012, the NTSB says, citing maintenance records. At that time, maintainers inspected the blades visually and using "fluorescent penetrant", says the NTSB.

The engine's blades had logged 32,000 cycles since new, and inspections conducted after the incident revealed no cracks on other blades, the NTSB says.

Flight attendants described the incident to the NTSB. After hearing a loud explosion they used portable oxygen bottles and began calming and assisting passengers.

"As they moved toward the mid-cabin, they found the passenger in row 14 partially out of the window and attempted to pull her into the cabin. Two male passengers helped and were able to bring the passenger in," the NTSB says.

CFM International has since issued a service bulletin calling for blade inspections, and the FAA has issued two directives requiring inspections.