Volga-Dnepr Group has received its first Boeing 777 Freighter, delivered under a sale and leaseback deal with Dubai Aerospace Enterprise (DAE).

The aircraft will be operated by Volga-Dnepr unit AirBridgeCargo, says Boeing.

“We are delighted to welcome Volga-Dnepr Group as our newest customer as they introduce the 777 Freighter to their fleet,” says DAE chief executive Firoz Tarapore.

“DAE Capital is the world’s largest lessor of the profitable and efficient 777 Freighter. We look forward to a long and rewarding relationship with Volga-Dnepr Group as they continue to grow their successful operations.” 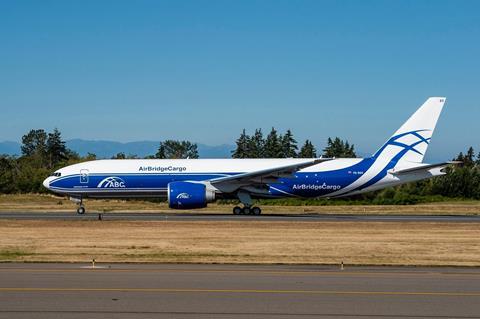 The delivery comes just two months after a legal dispute between Boeing and the UK division of Volga-Dnepr. In early June, a US federal judge struck down a request from Volga-Dnepr UK that the airframer be barred from selling one 747-8F and three 777Fs to other companies.

Volga Dnepr had been due to receive the four jets in early 2020, but amid the coronavirus pandemic told Boeing that it was unable to take delivery.

Volga-Dnepr’s financial situation improved, however, and it attempted to retract its previous communication to Boeing. It was too late, as Boeing had already found buyers for the four jets.