An eye-catching innovation which could help to keep maintenance personnel out of harm’s way is being showcased by France’s DGA defence procurement agency and developer Warein.

Being demonstrated with a Dassault Mirage 2000D of the CEV flight test centre at the French defence ministry’s outside exhibit, Bulle is an extendable fabric articulated robotic arm housed within a protective inflatable casing.

The developmental product on show – which has its origins in the nuclear inspection arena – can be deployed to a length of 5.5m (18ft) with a camera sensor installed. This will enable a maintainer to monitor aircraft surfaces, or perform tasks such as applying de-icing fluid, without the need for a crane or scaffolding. 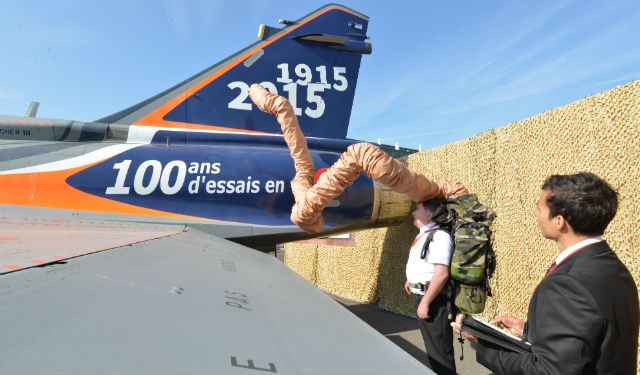 Being shown one year into a three-year project funded via the DGA’s RAPID scheme – which provides funding to initiatives pursued by small and medium-sized enterprises – Bulle is currently deployed from a backpack and controlled via a tablet computer. However, Warein says it is pursuing the use of increased automation in the system’s deployment and operation. Versions with a reach of up to 15m could be produced and mounted on a ground cart.

Also on show are examples of a flax-derived composite material, developed by French company Lineo and also receiving support from the RAPID initiative.

The natural product has the same strength as carbon or glass fibre but with reduced weight and improved anti-vibration properties, says chief executive François Vanfleteren. Potential applications for the innovation exist in the aerospace and automotive sectors, he says, for example in aircraft panels, flooring and air ducts.