Australia has accepted its first pair of Sikorsky/Lockheed Martin MH-60R shipborne helicopters, under a 24-unit Foreign Military Sales deal signed via the US government in mid-2011. The lead aircraft were received from the US Navy during a ceremony at Lockheed’s Owego modification site in New York on 10 December.

To replace the Royal Australian Navy’s existing Sikorsky S-70 Seahawks, the “Romeo” fleet is being acquired under a project worth more than A$3 billion ($2.7 billion).

“The entire fleet will be delivered incrementally by the end of 2016,” with roles to include anti-submarine and anti-surface warfare, search and rescue and vertical replenishment, says Lockheed.

Describing the new model as “a potent maritime combat helicopter,” Rear Adm Tony Dalton, head of the Australian Defence Materiel Organisation’s helicopter systems division, says: “We look forward to sharing in the US Navy’s ongoing technology upgrades and continuing to build upon the proven capabilities” of the new type.

Australia’s first MH-60R made its debut flight at Sikorsky’s Stratford site in Connecticut in June 2013 (below), before being transferred to Owego for mission system integration work. 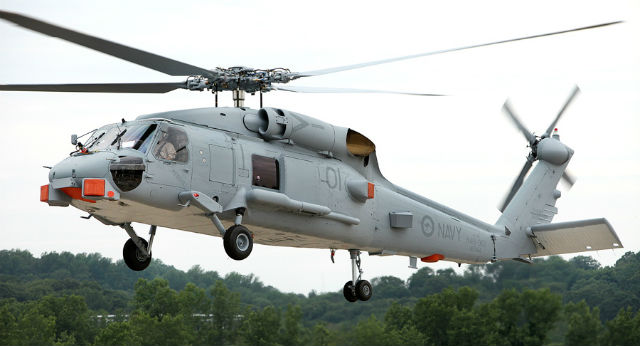