EADS company Cassidian has delivered the Eurofighter programme’s 400th production aircraft, with the asset also becoming the 112th to have been handed over to Germany.

Carrying a special colour scheme and the Luftwaffe registration 31+06, the single-seat fighter was delivered during a 4 December ceremony held at Cassidian’s Manching final assembly site near Munich. 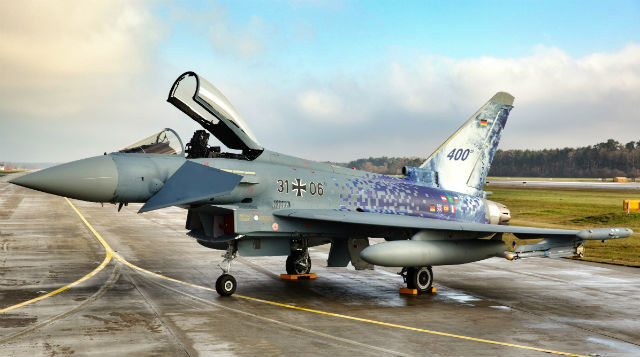 While describing the occasion as an “historic milestone”, Eurofighter chief executive Alberto Gutierrez added: “Now we must focus much more strongly on export campaigns, in order to win new contracts and new customers for this outstanding aircraft.”

The four-nation programme’s first aircraft was delivered to the Royal Air Force 10 years ago. A global fleet of the type flown by core operators Germany, Italy, Spain and the UK, plus export buyers Austria and Saudi Arabia, has now amassed over 210,000 operational flying hours, Eurofighter says.

Prior to the latest delivery, Flightglobal’s MiliCAS database recorded a combined 356 Eurofighters as being in active service with the programme’s six current operators. Oman also earlier this year signed a contract to acquire 12 of the Eurojet EJ200-powered type.