Malaysia's navy has issued a map showing the seven search sectors for the missing flight QZ8501.

The area extends over a large portion of the Java Sea to the northwest of Belitung Island and west of Borneo. It is being searched by an international coalition composed of ships and aircraft from Indonesia, Malaysia, Singapore, and Australia

The map also gives the location where Indonesian air traffic controllers lost contact with the aircraft, as well as the aircraft’s intended flight plan. The map suggests the Airbus A320 aircraft had deviated somewhat to the west of its intended course. 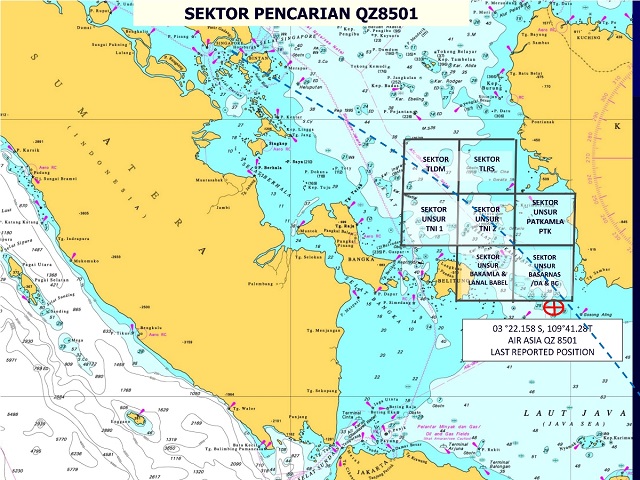 The vast majority of the search is taking place at sea, while the eastern half of Belitung Island is also being examined.

The Malaysian disclosure follows a decision on the morning of 29 December by Indonesia’s National Search and Rescue Agency (Barsanas) to expanded the search area for flight QZ8501, which disappeared on the morning of 28 December with 155 passengers and seven crew while operating the Surabaya-Singapore route.

Meanwhile, in a series of tweets late in the day on 29 December, Indonesia’s transport ministry indicates that no confirmed signs of the lost aircraft have been discovered.