Conducted at the Swedish company's Linköping site on 23 February, the event came a little over two years after the GlobalEye deal was announced at the Dubai air show in November 2015. The UAE initially signed a two-aircraft order, before also taking an option on a third example last year. 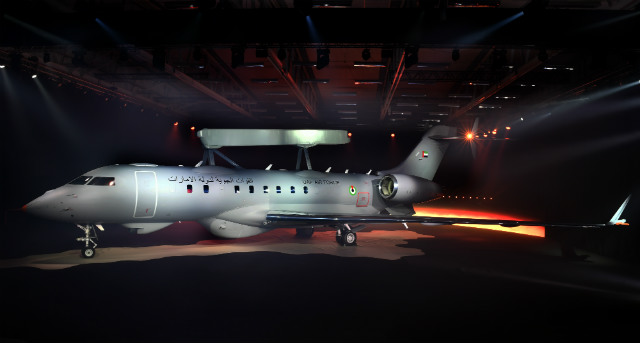 Adaptations include adding a Saab Erieye ER airborne early warning and control radar in a "skibox" fairing above the fuselage, plus a search radar and electro-optical/infrared sensor beneath, enabling the GlobalEye to also perform maritime and overland surveillance tasks.

This combination of sensors aboard an ultra-long-range business jet platform "brings extended detection range, endurance and the ability to perform multiple roles with one solution, including search and rescue, border surveillance and military operations," Saab says.

"This first aircraft is equipped and being prepared for ground and flight trials to gather aerodynamic data as part of the ongoing development and production programme," the company adds. It has not disclosed a delivery schedule for the UAE's new capability.

“This milestone is clear evidence that the GlobalEye programme and Saab are delivering on our commitments,” says Anders Carp, senior vice-president and head of the company's surveillance business area.