BAE Systems has delivered its latest pair of Eurofighter Typhoons to export customer Saudi Arabia, boosting the nation’s fleet of the type to 32 aircraft.

Photographed at Toulouse-Blagnac airport in France during delivery flights conducted from the UK company’s Warton site in Lancashire in mid-October, the single-seat fighters are drawn from a 72-unit Project Salam order. 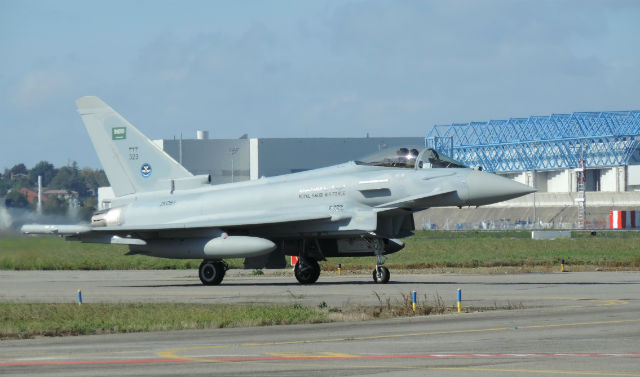 BAE transferred an initial 24 Tranche 2 Typhoons by 2011, including six two-seat trainers, before entering discussions with Riyadh over the configuration and price of its remaining examples.

While this process has yet to conclude, the company earlier this year resumed deliveries, starting with four trainers. This was followed by the transfer of the first two single-seat examples from the remaining order, according to Flightglobal’s MiliCAS database.

The newly delivered aircraft – carrying the registrations 323 and 324 – should be followed by another two Saudi Typhoons this year, according to a production schedule outlined by BAE in an earnings update earlier this year.

The company, which declines to comment on the recent transfer, also hopes to make a repeat sale of the type to Riyadh.