Recent images from the Chinese internet suggest that Beijing is making significant progress with its military helicopter programmes.

The most recent batch of images show a Harbin Z-19 with what appears to be a mast-mounted radar system. The Z-19, which is roughly comparable to lighter attack helicopters such as the Airbus Helicopters Tiger, is capable of carrying anti-tank missiles and is usually equipped with a chin-mounted cannon.

It is unclear if the mast-mounted system is, indeed, a true radar, or merely a mock-up to test the aerodynamics of the system. Mast-mounted radars such as that carried by the Boeing AH-64E Apache Longbow greatly enhance an attack helicopter’s ability to identify and engage targets at long ranges. 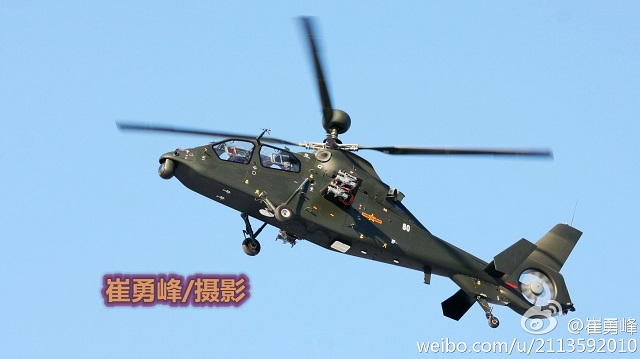 The Z-19 is one of two dedicated Chinese attack helicopter programmes. The other is the heavier CAIC WZ-10, which is roughly comparable to the Apache.

The Z-19 development follows images last month that appeared to show the first flight of a locally-developed utility helicopter closely resembling the Sikorsky UH-60 Black Hawk. The aircraft is similar in layout to the US S-70-series platform, but has a five-bladed main rotor, as opposed to four.

Following the emergence of the images, a spokesman from the Chinese defence ministry confirmed that Beijing is developing a new helicopter. Chinese military experts have unofficially labelled the new utility type as the Harbin Z-20.