KAL-ASD has revealed an unmanned variant of the MD Helicopters MD500 attack helicopter that it has developed with assistance from Boeing.

The South Korean company showed a full-sized mock-up of the helicopter, designated KUS-VH, at its stand at the Seoul International Aerospace & Defense Exhibition. This is depicted as being armed with two Lockheed Martin AGM-114 Hellfire air-to-surface missiles and a pod of 2.75in-diameter rockets. The windows of the aircraft are entirely blacked out.

The first flight of the KUS-VH is scheduled for this month, and the company will develop two prototypes. 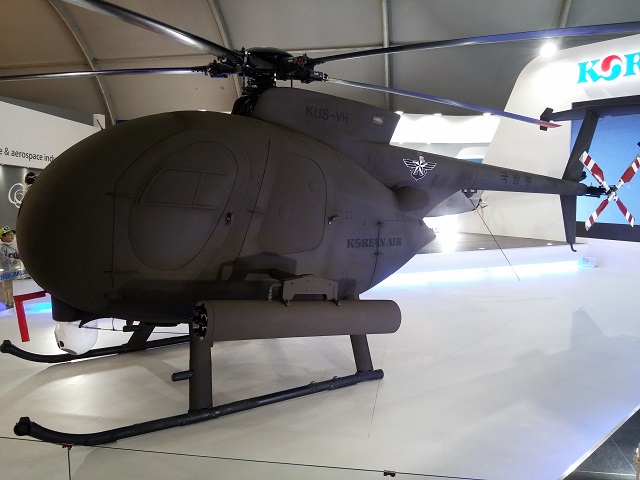 Boeing provided extensive technological expertise for the KUS-VH as part of its offset obligations related to South Korea's 2013 decision to purchase 36 AH-64E Apache attack helicopters. The KUS-VH draws on a great deal of Boeing’s work with its unmanned Boeing H-6U Little Bird programme. The manufacturer brought this to South Korea for a demonstration to local defence officials.

One key modification for the unmanned KUS-VH is the addition of a large fuel tank in what ordinarily would be the area occupied by rear seats. KAL-ASD says this increases the aircraft's endurance to 4h, compared with 2h for the manned version of the MD500. 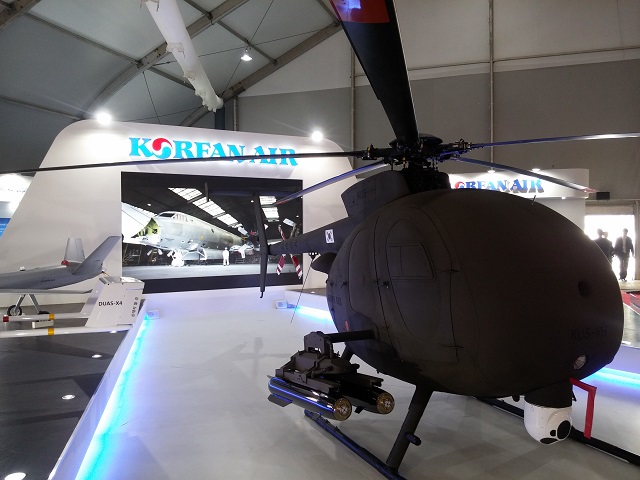 KAL-ASD says flight testing will proceed in three phases over the next two years. The first of these will see the aircraft's basic flight performance tested, and the second will involve the design undergoing simulated missions. The last phase will see weapons employed.

The South Korean government has no formal requirement for such a platform, but KAL-ASD says KUS-VH conversions would be an efficient way to recycle some of the approximately 200 MD500s that South Korea will retire in the next 10 years.

KAL-ASD says the system is relatively low cost, as it dispenses with pilots. In a conflict, the unmanned rotorcraft could be employed to attack targets where it would be too dangerous to employee a manned platform.