Joyce was recognised for executive leadership, while Pinto was presented with the Flight Airline Business award.

The 9 July ceremony at the the Honourable Society of the Middle Temple in London was the 16th instalment of the awards, organised by Flight Airline Business magazine in partnership with the civil aviation practice of human-capital solutions provider Korn Ferry.

Joyce earned his victory by overseeing Qantas's transition from a dire financial position to record results in only a few short years, culminating in a A$1.53 billion ($1.16 billion) profit for 2016. He has taken an iconic airline brand into new territory along the way, including a shift towards Asia growth and a partnership with Emirates. 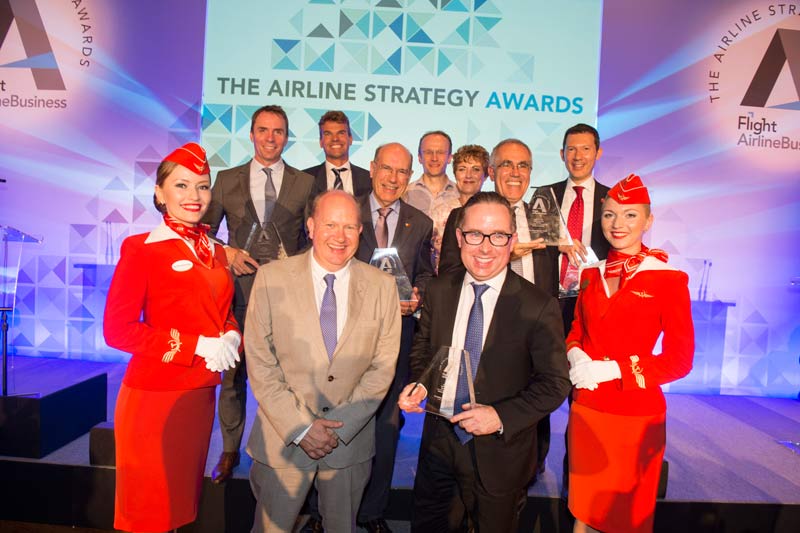 "Alan is among a small group of airline chiefs who have overseen an airline's transition from the worst financial results in its history to record profits," says Max Kingsley-Jones, executive director content at FlightGlobal and host of The Airline Strategy Awards. "His bold strategy to turn Qantas around impressed all the judges. It's an incredible story."

In winning the Flight Airline Business award, long-serving TAP chief Pinto was acknowledged for his leadership of a medium-sized flag carrier in a European market that has proven relentlessly challenging for such a business model.

Pinto has successfully established a sustainable business capable of attracting private investment, achieving that amid swings in market conditions and the ever-expanding presence of low-cost rivals.

"It doesn't get much tougher in the airline business than being chief executive of a medium-sized flag carrier in Europe," says Kingsley-Jones. "During his long tenure at TAP, Fernando has confronted many challenges, built on the strengths of Portugal's geographic location, and created an impressive business."

Other winners on the night were Jozsef Varadi, chief executive of Wizz Air, for low-cost leadership; Aeroflot chief Vitaly Saveliev, for sector leadership; Air Canada, in the finance category; KLM, for marketing; and EasyJet, for network strategy.

Kingsley-Jones says: "While the airline industry as a whole remains in sound shape, external events continue to cast a potential shadow across the sector. But even with so much uncertainty threatening the fine balance required to keep our industry buoyant, the most innovative airline management teams continue to raise the bar. The Airline Strategy Awards have recognised the best individuals and teams in boardroom leadership since 2002, and this year's winners all excel in this regard."