Boeing sent its Bombardier Challenger 604-based maritime surveillance aircraft (MSA) to appear in the static display at this year’s Royal International Air Tattoo (RIAT), as the company looked to attract customers for the offering.

Proposed as a lower-cost alternative to acquiring a dedicated maritime patrol aircraft such as its own 737-based P-8 Poseidon, the MSA lacks armaments or the ability to deploy sonobuoys.

The experimental aircraft sent to RIAT – registered N614BA – is representative of a proposed production MSA configuration, which would use either the Challenger 605 or 650 platforms. Canada’s Field Aviation is Boeing’s conversion partner for the project. 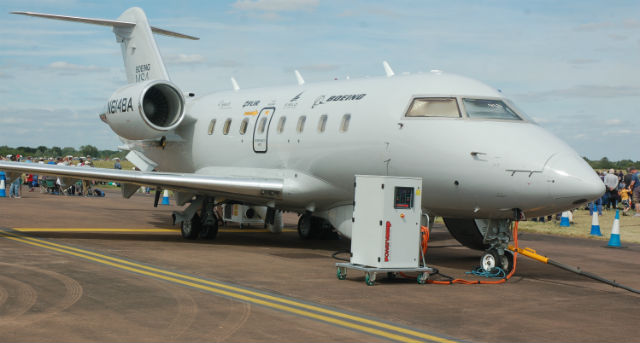 Following its appearance at the show, which took place at RAF Fairford in Gloucestershire from 17 to 19 July, the aircraft will be flown to Finland to support a demonstration for a potential customer, Boeing says.

The MSA concept involves using some mission equipment from the larger P-8, such as onboard operator consoles. Boeing exhibited the adapted Challenger 604 at last year’s Farnborough air show in the UK.