Saudi Arabia could be set to acquire a follow-on batch of 48 Eurofighter Typhoons, pending the conclusion of government-to-government discussions with the UK disclosed on 9 March.

"The UK government has signed a memorandum of intent with the Kingdom of Saudi Arabia to aim to finalise discussions for the purchase of 48 Typhoon aircraft," BAE says. The Royal Saudi Air Force already has acquired 72 of the European type, with deliveries under its Project Salam acquisition having concluded last year. 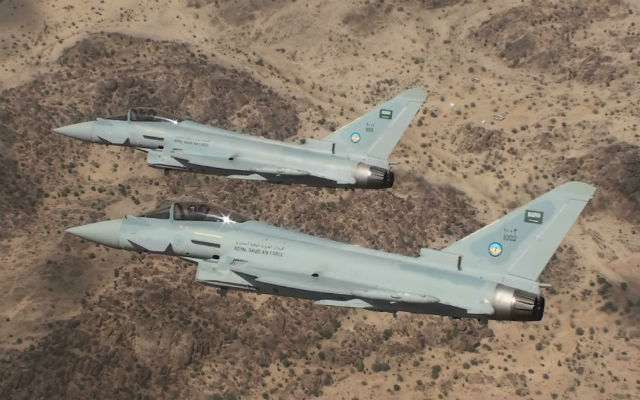 "We are committed to supporting the kingdom as it modernises the Saudi armed forces and develops key industrial capabilities critical to the delivery of 'Vision 2030'," says BAE chief executive Charles Woodburn, referring to Riyadh's ongoing military transformation programme.

Further details of the potential sale – such as an expected delivery schedule – have not been disclosed. In its annual results overview for 2017, published on 28 February, BAE said: "Discussions with current and prospective operators of the Typhoon aircraft continue to support the group's expectations for additional Typhoon contract awards. However, there can be no certainty as to the timing of these orders."

While the memorandum of intent comes as good news for BAE and its partners in the Eurofighter consortium, earlier expectations for a follow-on Saudi acquisition had been based around the potential sale of up to 72 Typhoons.

Other beneficiaries of a fresh Typhoon order would include the Eurojet consortium, which supplies the type's EJ200 turbofan engines; Leonardo, responsible for its electronic warfare equipment and radar, as part of the Euroradar group; and guided weapons supplier MBDA.