The UK Royal Navy is poised to conduct its first operational flights with the Boeing/Insitu ScanEagle unmanned air system, as the service continues to evaluate its long-term requirements for such equipment.

“The [ScanEagle] system starts real operations from this week, on maritime security patrols in the [Arabian] Gulf and in the Indian Ocean,” says Cdr Bow Wheaton, the RN’s maritime aviation capability desk officer. The activity will involve the service’s Type 23 frigate HMS Somerset and the Royal Fleet Auxiliary landing ship Cardigan Bay, he adds, with the first embarked training flights having been conducted recently from the latter.

Delivered by Boeing Defence UK under a contractor-owned, contractor-operated arrangement with the Ministry of Defence, the ScanEagle service provision will deliver up to a maximum of 600 flight hours per month. Capable of operating for up to 12h at a time, the 22kg (48lb) aircraft carries an electro-optical/infrared sensor package to support intelligence, surveillance and reconnaissance tasks up to 40nm (74km) away from its launch vessel. 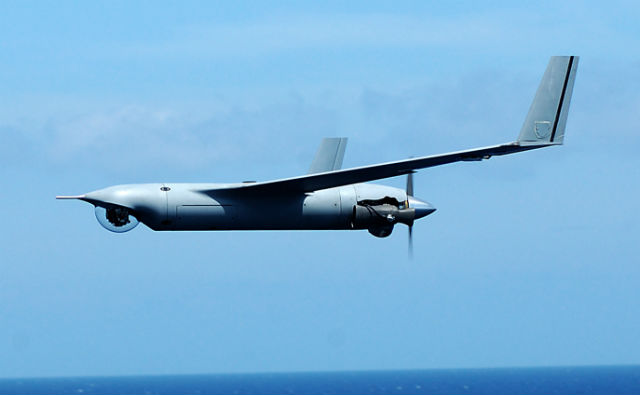 Noting that the organic capability is expected to be in great demand once available, Wheaton notes: “we are already looking at what goes on beyond March 2015, when this urgent operational requirement deal runs out.”

Speaking during a UAS media facility held at the Royal Air Force’s Waddington base in Lincolnshire on 15 January, Wheaton revealed that the RN will later this year perform a trial campaign with an optionally-piloted rotorcraft, ideally from a Type 23 vessel.

Being funded in association with the MoD’s Defence Science and Technology Laboratory, the activity will be performed in conjunction with AgustaWestland, which will be supplying an adapted example of the SW-4 light helicopter produced by its Polish subsidiary PZL Swidnik.

Potential applications to be assessed during the demonstration include persistent surveillance, minehunting and hydrographic survey tasks, Wheaton says.