Saab's Gripen E programme has suffered a setback, with the Swiss government having narrowly lost out in a public referendum on whether to fund a planned 22-aircraft acquisition of the Swedish-built type.

Held on 18 May, the nation's vote on whether to advance with the Gripen Fund Law was defeated by a "no" vote representing just over 52% of respondents. In a statement released after the result, Saab says this "means that the Gripen E procurement process in Switzerland stops".

Responding to the outcome, Swiss federal councilor Ueli Maurer warns: "This decision will cause a security gap. We will do everything we can to fill this gap in these difficult circumstances as quickly as is possible. Different options on how best to ensure the armed force's operational readiness must be considered in the next few months."

Maurer adds that "it will be some time before new proposals are submitted on how to protect Swiss airspace after the anticipated decommissioning of the [Boeing] F/A-18s in 2025. The federal council and parliament will then be required to decide on filling the security gap." The Gripens were to replace the Swiss air force's remaining Northrop F-5 fighters, from later this decade. 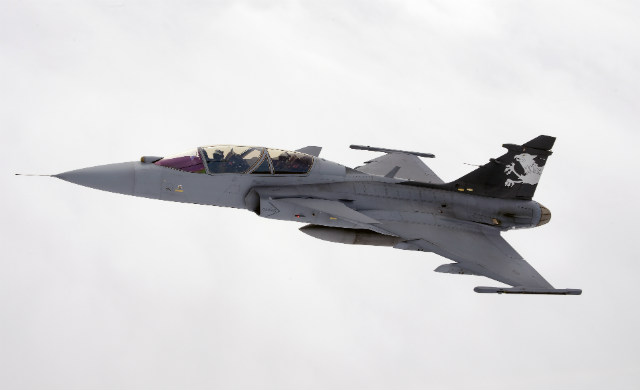 Despite the disappointment, the Swedish airframer comments: "For Saab, the Gripen E programme continues according to plan, with development and production of 60 Gripen E for Sweden ongoing and deliveries scheduled for 2018." And it adds: "The negotiations regarding 36 Gripen NG to Brazil are ongoing, and according to plan with the ambition from both parties, an agreement should be signed in 2014."

“We respect the process in Switzerland, and do not comment on today’s outcome," says Saab chief executive Håkan Buskhe. "Following selection in 2011, hundreds of business relationships in Switzerland have been created through the Swiss industrial participation programme, which was created in relation to the Gripen E procurement. These are relationships we look forward to continuing as long as possible.”

Saab adds that of the more than 500 supply deals arranged with 125 Swiss businesses in support of the planned deal, "contracts placed will be honoured, subject to their terms and conditions."

However, the public decision could threaten some proposed collaborative measures, such as a pact between Saab and Pilatus to offer the PC-21 turboprop as a possible solution for Sweden's future pilot training requirements.