Air Canada has reiterated its call for the government of Canada to ease strict four-month-old coronavirus-prompted travel restrictions that have disrupted the country’s aviation industry and continue drag down air transport.

The quarantines have been in place since the start of the global health crisis.

“The situation is becoming increasingly urgent,” Jim Chung, Air Canada’s chief medical officer, writes in the letter. “Canada has made virtually no change to its quarantine restrictions since mid-March, despite continuing improvements containing the spread of the virus both in our country and in many others.” 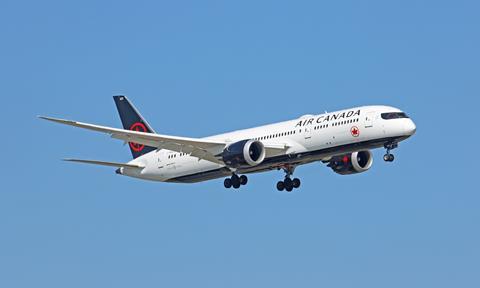 Air Canada is lobbying for lifting of quarantine rules

In Canada, air travel is often the most-efficient and most-practical means of travelling between communities, especially in the country’s vast far north.

In March, Canada banned all non-nationals from entering the country, with few exceptions. All travellers arriving in Canada by land, sea or air, including citizens, are subject to a mandatory 14-day quarantine. Those found violating the requirement can be subject to a fine of C$750,000 ($555,000), six months in jail and expulsion from the country. Those travelling within the country and between provinces can also be subject to self-isolation requirements.

Air Canada’s Chung proposes establishing a list of “exempt countries”, travellers from which would not be restricted to enter, nor be required to isolate upon arrival. The 14-day quarantine could be waived or shortened for travellers arriving from non-exempt countries who present a negative Covid-19 test no older than 72 hours.

He cites how other G20 countries such as Germany, France, Italy, the UK and Switzerland have managed re-openings while remaining vigilant of local flare-ups. “[Other countries] have shown that evidence-based, reasonable alternatives do in fact exist. Therefore, we are hereby proposing, for your consideration, that the blanket 14-day quarantine be replaced as soon as feasible with the science-based alternative.”

This alternative he proposes includes establishing a list of “Exempt Countries” from which travellers would not be restricted to enter. Should a traveler from one of the non-exempt countries wish to enter Canada their 14-day quarantine requirement would be waived if they present a negative Covid test no older than 72 hours.

The list of exempt countries would be reviewed and updated every two weeks.

The appeals echo Air Canada’s Chief Executive Calin Rovinescu, who has repeatedly called on the government to reassess the situation more than four months into the crisis in order to allow the airline to do business again “in a smart and measured way”.

Addressing shareholders in June, he said, “Covid-19 has upended everything [and] painfully unwound a decade of profitable growth” for the airline. He urged the government to “find a responsible way to co-exist with Covid-19 until there is a vaccine.” At the time, he called the quarantines “disproportionate [and] out of step with other countries”.

The US-Canada border – the longest peaceful border in the world – has been closed to non-essential travel since 21 March. This restriction, which will continue through at least 21 July, will be reviewed this week.

“To be clear, given the current challenges in the United States in controlling the virus, we are not proposing relaxing the US border restrictions at this time,” Chung writes.