The Australian Transport Safety Bureau (ATSB) is investigating an incident in which an Airbus A350-900 operated by Singapore Airlines nearly pushed back from the gate at Brisbane Airport with its pitot tubes covered.

The incident occurred on the morning of 27 May 2022 when the aircraft (9V-SHH, MSN316) was about to depart for Singapore operating flight SQ256, according to the ATSB’s preliminary report. 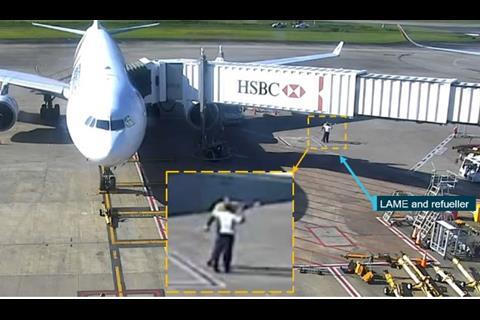 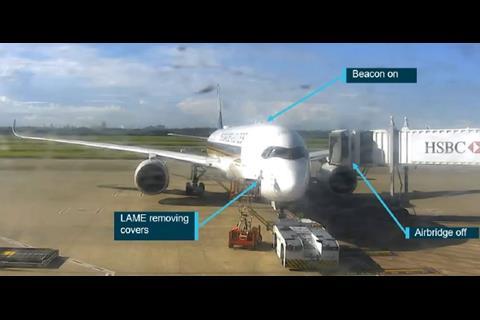 One minute before departure, the licensed aircraft maintenance engineer removes the pitot tube covers from the SIA A350

Two engineers were contracted to support the aircraft during its scheduled 2h turnaround. They also had responsibilities for another aircraft.

The aircraft’s crew had observed the covers during their walkaround of the aircraft, but it is company policy that they be fitted at Brisbane. The precaution stems from the existence of a local mud wasp that stuffs mud and other debris, such as dead insects, into pitot tubes.

Subsequently, the maintenance crew member in question said that they had not verified the removal of the covers, nor asked the other engineer to remove them. Still, the assumption was made that the covers had been removed.

An aircraft refueller at an adjacent bay, however, observed that the covers were still in place as the A350 prepared for pushback, and notified one of the maintainers. Subsequently the covers were removed.

ATSB notes that there was a similar incident on 18 July 2018, where various lapses during pre-departure checks resulted in an Airbus A330-300 of Malaysia Airlines take off with covers on all three of its pitot tubes.

ATSB will continue its investigation into the incident, including a look at inspection procedures, training, and fatigue management at MRO firm Heston.