A Biman Bangladesh Airlines Bombardier Q400 turboprop overran the runway at Myanmar’s Yangon International airport while landing during heavy rain on the evening of 8 May, according the Yangon airport.

No casualties have been reported among the 30 passengers and six crew aboard the aircraft, which has serial number 4367, according to the airport and Bombardier.

“All passengers and crew immediately received proper treatment, transportation and support,” says the airport. “There were no casualties thus far and the situation is under control.”

The aircraft was operating Biman flight 60 from Dhaka, Bangladesh to Yangon at the time of the incident. The Q400 “skidded and overran the runway at 18:51 local time during a landing attempt amidst heavy rain” and poor visibility, the airport says.

A photograph released by The Myanmar Times shows the Q400 resting on its belly with substantial damage. The aircraft’s fuselage near the tail appears ruptured. 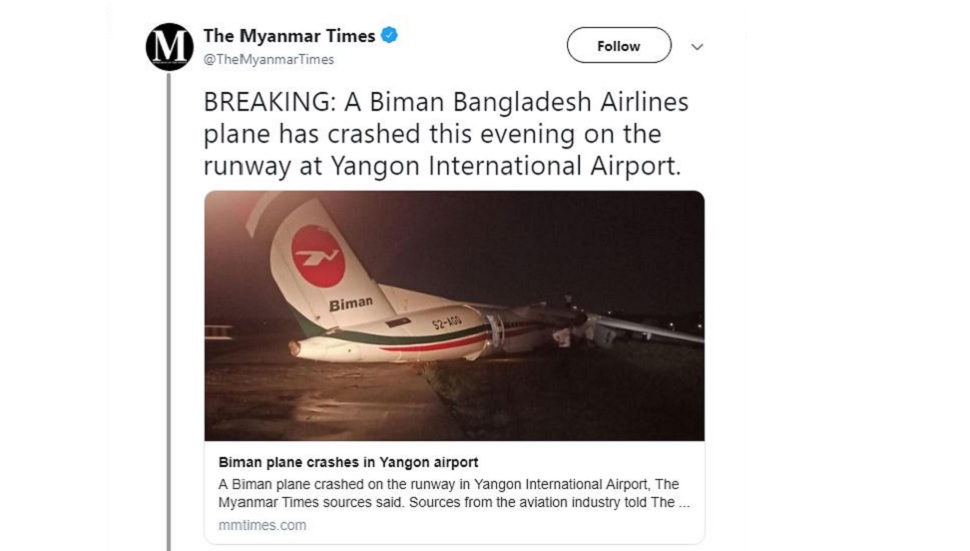 Montreal-based Bombardier “cannot comment on the potential cause of this incident until the investigation is complete”, it says.

Bombardier delivered the Q400, which has registration S2-AGQ, new to Egyptian carrier Smart in 2011. Smart still owns the Q400, though Biman has leased it since 2015, according to Cirium Fleets Analyzer.