Pratt & Whitney Canada has introduced an enhanced inspection regime for PW127 engines following a pair of cabin fume events when ATR twin-turboprops were brought back into service following storage.

UK investigators concluded that the incidents, in June and July 2020, were caused by bleed air valves in four PW127Ms seizing or becoming hard to operate due to corrosion. 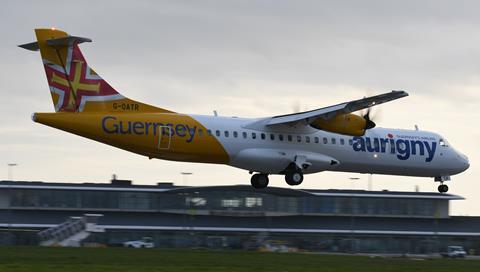 Both 2019-built aircraft were operated by Aurigny Air Services, which is based on the Channel island of Guernsey. The Air Accidents Investigation Branch (AAIB) believes that the large amount of airborne salinity present contributed to the corrosion.

During the first incident, an ATR 72-600 (G-OATR) was being prepared for a passenger service from Guernsey to Southampton having previously been flown 10 days earlier, in line with the engine manufacturer’s recommendation of a flight every 14 days.

But once the engines were started, cabin crew reported a “faint haze or smoke” in the cabin, which then increased in intensity.

Faced with no applicable checklist in the ATR’s quick reference handbook, the aircraft commander shut down the engines and ordered an evacuation via the rear doors.

Suspecting that the incident had been caused by the low fleet utilisation seen last year affecting the aircraft’s environmental control system, Aurigny cut the maximum interval between flights from 14 to seven days, the AAIB states.

However, on 22 July, as another ATR 72-600 (G-ORAI) was prepared for departure, cabin crew again “reported a slight haze or smoke in the cabin after both engines had been started and the aircraft had been pushed back.” Passengers were again evacuated.

G-ORAI had previously flown just five days before the incident, notes the AAIB.

Subsequent tests with the engines run at 80% power and the bleed air and environmental control systems operative saw smoke and haze form in the cabins of both aircraft.

Examination of all four engines revealed that in each case the P2.5/P3 air switching valves were “either stiff to move or seized”, with corrosion found on pistons and sleeves.

That valve regulates from which stage of the engine’s compressor bleed air is taken and should close once a powerplant’s high-speed rotors are running at 40-45%. However, as the AAIB points out, should the valve remain open “then high oil consumption and temperature can result, as well as an oil smell in the cabin and smoke in the exhaust.”

Following the second incident, Aurigny reduced the interval between flights to three days or ensured that engine ground runs took place to check the correct function of the air valves. The valves are now also inspected every 42 days and their piston rings replaced every 100 days. Engine start procedures have also be updated.

P&WC, meanwhile, has changed the engine’s maintenance manual to mandate inspection of the valve after any period of storage, “irrespective of duration and environment”, and its replacement during overhaul.

In addition, it has “initiated a redesign of the P2.5/P3 air switching valve” to consider the materials used in its assembly.