A Xiamen Airlines Boeing 737-800 came to rest on its belly after an apparent runway excursion at Manila Ninoy Aquino International airport the evening of 16 August, according to multiple media reports.

Few details are yet known about the accident, but the incident reportedly involved Xiamen flight 8667 from Xiamen to Manila.

The aircraft circled repeatedly prior to landing, according to FlightGlobal's FlightStats.

Photographs posted on social media appear to show the aircraft on its belly and largely intact, though the left side engine may have detached. 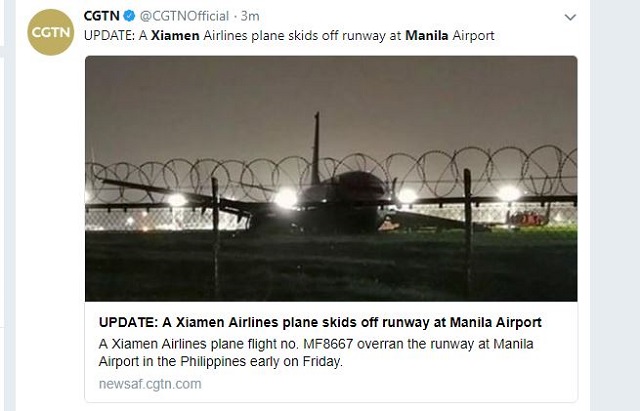 It remains unclear if the accident injured passengers or crew. Neither Xiamen nor the Manila airport immediately confirmed the incident when contacted by FlightGlobal.

Heavy storms passed through the Manila area in recent hours. The region has seen heavy rain and wind from a monsoon and tropical storm, though it remains unclear if weather played any factor in the accident.

The aircraft operating Xiamen flight 8667 was a 737-800 with registration B-5498, according to FlightStats.

Boeing delivered that aircraft to Xiamen in 2010, and it had accumulated 26,500h and 14,900 cycles as of May, according to Flight Fleets Analyzer.