Sikorsky has attached main rotor blades to its CH-53K ground test vehicle (GTV) and will soon attach the tail rotor blades, according to officials from the company and the US Marine Corps.

The programme is on track to turn the rotors using the aircraft's GE38-1B turboshaft engines – the so-called "shakedown light-off" tests — by the end of the month, says Michael Torok, Sikorsky’s vice president of the programme.

Torok made his comments during a press briefing at the Navy League's Sea-Air-Space Exposition near Washington, DC, on 9 April.

He adds that development is progressing well on the heavy-lift helicopter, with first flight still scheduled for sometime near the end of this year.

The aircraft that will be making the first flight is nearly completed, though the company must still conduct tests of the main gear box, says Torok. 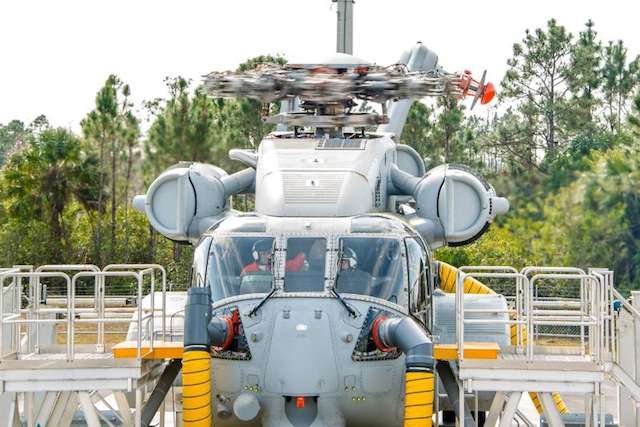 USMC Col Robert Pridgen, CH-53K programme manager, says Sikorsky and the military are seeking foreign customers, with potential customers including Germany and Israel, and he predicts interest will further materialise following first flight and as the company moves to production.

Officials say they have also received interest from international partners in the Asia Pacific region.

"Build it and they will come," Pridgen says.

The company has been testing the CH-53K’s seven main all-composite rotor blades and its four tail rotor blades at its headquarters in Stratford, Connecticut.

In December 2013, Sikorsky first powered up the GTV’s auxiliary power unit in Florida as part of the “bare-head light-off” tests of the engines and rotor without blades.

The GTV’s three main engines were started in January.

Despite similarities to the CH-53E Super Stallion, the CH-53K's three turbines can crank out 7,500shp each, compared with the 4,380shp GE T64 powerplants on the legacy platform.

That is triple the capacity of the E-model, according to Sikorsky.