Sikorsky has been picked to build the next fleet of US presidential helicopters.

The news was announced on 7 May by the US Navy, which says it awarded the Connecticut-based company a $1.24 billion contract to build six aircraft.

Sikorsky says its design is based on the company’s S-92; a twin-engined, medium-lift model that it says is used as a head of state transport by 10 countries.

“We are honoured by this news and the vote of confidence in the Sikorsky team and the proven S-92 platform,” says Sikorsky president Mick Maurer. 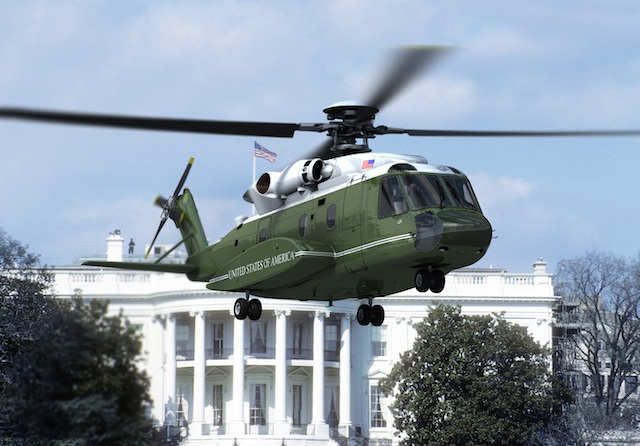 The project, called the VXX Presidential Helicopter Replacement programme, was competitively bid, but the USNavy confirms that Sikorsky was the only bidder. The company submitted its proposal in August 2013.

The project kicks off this year with $42 million in funding for research, development, test and evaluation.

In addition to the six aircraft to be delivered to the US Marine Corps, Sikorsky will also deliver two simulators, says the company.

Two of the six aircraft will be engineering development models (EDMs), which will be used by military personnel at NAS Patuxent River in Maryland to test the aircraft’s flight performance and mission communications systems, says Sikorsky.

Those aircraft will be delivered in 2018 under the terms of the contract.

The remaining four aircraft, called system demonstration test articles (SDTAs), will be used for operational tests before being transitioned to operational status, says the company.

Sikorsky expects the USN to eventually order 17 production aircraft, with the first of three orders for those aircraft coming by early 2019. Sikorsky says it will likely delivery those production rotorcraft by 2023.

The company says it will manufacture the baseline S-92s at its facility in Coatesville, Pennsylvania, and perform modifications at its Stratford, Connecticut, headquarters.

Lockheed Martin, a subcontractor, will then integrate mission and communications systems at its facility in Owego, New York. The aircraft will then return to Connecticut for cabin interior work, says Sikorsky.

Sikorsky says it has delivered more than 200 S-92s to customers worldwide. Operators include offshore oil and gas companies and civilian search and rescue agencies.