Airbus remains confident of its prospects in China, despite the fact that its order backlog for Chinese operators is dwindling with no major deals clinched in the last few years.

Speaking at a media roundtable on the eve of the Singapore air show, Airbus commercial chief Christian Scherer said the airframer is “hopeful” that it will be able to ”conclude additional transactions with Chinese customers”.

While not elaborating, Scherer says he is “optimistic that China will come back to an ordering cycle”. 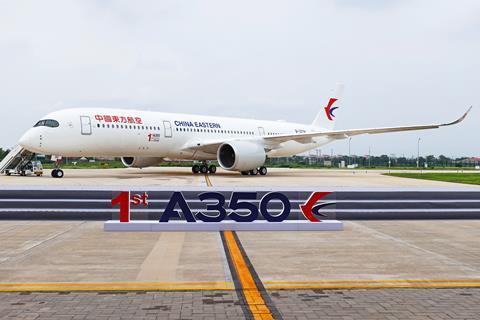 “Now with the passage of time, you see that, notwithstanding the pandemic crisis, we’ve continued to sell, very successfully, our product line, and so there’s a lot of pressure now on our friends in China to come to the party or run the risk of seeing not enough capacity to satisfy their need,” Scherer says.

Chinese operators accounted for 20% of Airbus’s deliveries in 2020, but a dearth of orders meant the backlog is dwindling. The last significant order – for over 300 aircraft – came in March 2019, following a visit to France by Chinese president Xi Jinping.

In recent years, Airbus had appeared to benefit from trade tensions between the USA and China, but Scherer plays down any meaningful impact, instead attributing its success to ”the quality of our products, the relevance of our products for our customers, the relationship we have with our customers,” says.

Airbus has an A320-family final assembly line at Tianjin, which is key to supplying to the company’s Chinese customers.

The airframer is also planning to create an aircraft “lifecycle” service centre in Chengdu to take advantage of the forecast spike of aircraft retirements in the country over the next 20 years.