The Montreal-based carrier is expanding its dedicated cargo fleet, with plans to operate 12 air freighters by the end of 2024, Air Canada chief financial officer Amos Kazzaz said at an investor conference held by Raymond James on 23 August.

The carrier’s fleet of freighters stood at four jets – all Boeing 767-300Fs – at the end of June. By the end of 2023, it will have seven Boeing 767s in dedicated freighter service, and will add another three of the type in 2024, the airline says.

In addition, Air Canada has acquired two 777s that will arrive in its fleet at the end of 2024. 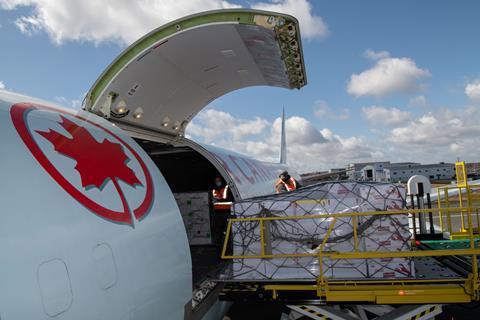 “We clearly see this as a large opportunity for ourselves” in terms of revenue diversification and growing demand for cargo services, Kazzaz says.

Toronto Pearson International airport, the country’s busiest, is convenient for long-haul cargo operations. Kazzaz says. Within 10h flight, an aircraft can reach 34% of the world’s most important cargo destinations.

“The infrastructure and geography really makes this a winning business for ourselves,” Kazzaz adds.

During the pandemic, Air Canada temporarily converted 11 passenger aircraft – a mix of 777s and Airbus A330-330s – into cargo carriers to keep them flying while passenger demand remained low due to travel restrictions. Passenger seats were removed from the aircraft to enable the transport of lightweight cargo in the cabins.

The airline flew its final passenger-to-freighter aircraft flight in May 2022.