The logistics arm of the AirAsia Group plans to obtain additional narrowbody freighters over the next two years.

“The Teleport chief executive is telling me he needs six in the near distance,” says AirAsia Group chief executive Tony Fernandes, referring to AirAsia’s logistics unit. 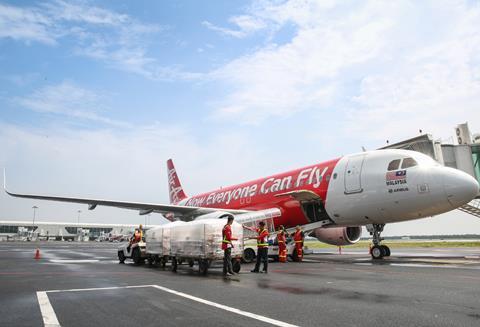 According to the business plan of the unit, which will induct its first 737-800 freighter in the third quarter, six freighters additional will boost the carrier’s overall cargo space by 45%.

“We might need a couple of slightly longer, slightly bigger ones as well to connect bigger cities.”

So far, the only freighter variant for the A320 family is the A321P2F.

Fernandes made the remarks during an online briefing with the Foreign Correspondents Association of Singapore.

Although Teleport will initially operate a dedicated 737 freighter, Fernandes notes that converted Airbus A320 family aircraft are a better option, given that AirAsia’s fleet is entire comprise of Airbus types.

“Obviously we have pilots and spare parts [for A320 family aircraft], so we would prefer it.”

As for the ownership structure for the incoming freighters, Fernandes indicates that they will almost certainly be leased, and that it will work lessors and Airbus on the acquisition.

“If a lessor wants to swap, we would swap,” says Fernandes. “If Airbus wants to do a deal on that we would do it.”

Cirium fleets data shows that the A321neo accounts for 349 of AirAsia’s 362 orders with Airbus.

He also observes that there is a possibility of a cargo version of the A350.

Fernandes adds that Teleport is already “making money”, though he did not provide specific figures.

In addition to the incoming 737-800F, Teleport already operates a pair of passenger A320s that have been temporarily converted to carry freight from its Bangkok hub.

The AirAsia Group first disclosed plans to develop “a cargo-only core network” when it released its first-quarter financial results in late May.