Ticket bookings for international travel in particular have been hit as the Omicron variant of Covid-19 spreads around the world, according to IATA, amid uncertainty over airline recovery momentum in the first quarter of 2022.

In outlook commentary released on 12 January, the global airline association says that the positive demand trends seen in newly released November 2021 data are under threat, despite reports of some resilience in visiting friends and relatives (VFR) traffic during December.

“Unfortunately, governments overreacted to the emergence of the Omicron variant at the close of [November] and resorted to the tried-and-failed methods of border closures, excessive testing of travellers and quarantine to slow the spread,” says IATA director general Willie Walsh. “Not surprisingly, international ticket sales made in December and early January fell sharply compared to 2019, suggesting a more difficult first quarter than had been expected.”

Compounding the situation, Omicron arrived in Europe as the region was already experiencing a “deteriorating pandemic situation”, IATA notes, adding that the variant has notably caused a resurgence of the virus in North America and Africa.

IATA does see some reasons for optimism, however, about the year ahead, once the Omicron wave has passed.

The airline body says that the variant’s milder symptoms “might suggest that the pandemic is becoming endemic”, meaning “its impact on human activities may start to diminish”.

IATA further takes heart from the UK’s recent decision to ease travel restrictions despite the strength of the country’s Omicron wave.

“This could point to a growing appreciation among governments of the limited impact of travel rules on Covid spread,” it says. 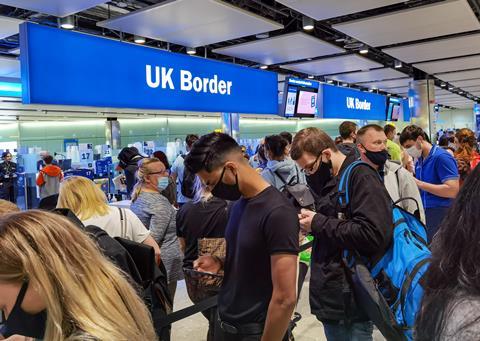 That development would be welcomed by Walsh, who has been critical of government handling of the pandemic.

”If the experience of the last 22 months has shown anything, it is that there is little to no correlation between the introduction of travel restrictions and preventing transmission of the virus across borders,” he states of the worldwide response to Omicron’s emergence.

“If experience is the best teacher, let us hope that governments pay more attention as we begin the New Year.”

The Omicron variant hit air travel markets after a November that saw some encouraging trends, according to IATA’s latest data.

Global revenue passenger kilometres (RPKs) continued to recover during the month, at 47% down versus 2019 levels on a capacity drop of 39.7%, following respective falls of 49.4% and 41.2% in October.

“The improvement was widespread across all regions,” IATA says, although it notes that increases in international demand were offset by a weaker performance from China’s huge domestic market amid new travel restrictions in the country.

The industry-wide load factor for the month was 71.3%, which is 9.7 percentage points down on the November 2019 level.

IATA notes, however, that while airlines in the Americas were close to pre-crisis load factors at around 80%, those in Asia-Pacific “posted their lowest loads for any month of November in the history of our time series since 1990”, at 59.7%.

Amid the dichotomy in load factors, overall industry capacity is still on the rise, despite some cancellations related to the Omicron variant.

“The number of scheduled flights is trending upwards across domestic and, in particular, international routes in Q1 2022,” IATA states.