Aviation will need 27,000 new pilots in 2021 as shortage continues despite downturn

Despite an industry slump that has seen mass pilot lay-offs, the global civil aviation industry will still require an estimated 27,000 new pilots from the end of 2021, or 264,000 over the coming decade.

That forecast comes from Canadian training and simulator provider CAE, which on 9 November released its latest prediction covering the demand and availability of pilots through 2029. 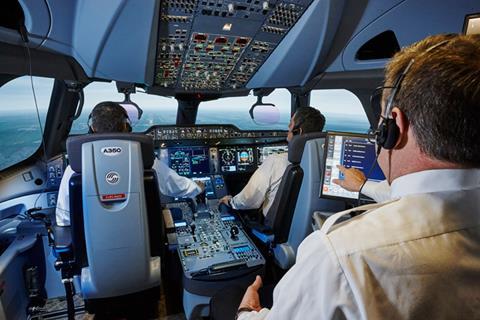 A CAE Airbus A350 simulator

Though still less than 2019 levels, by the end of next year “age-based retirements and attrition” will leave the industry short 27,000 flightcrew, says the study.

That figure will balloon over 10 years to a requirement for more than 264,000 new pilots, CAE says.

“Despite the short-term decline in the number of active pilots due to the impact of Covid-19, the civil aviation industry is expected to require more than 260,000 new pilots over the next decade,” CAE says.

“Fundamental factors influencing pilot demand prior to the Covid-19 outbreak remain unchanged. Age-based retirement and fleet growth were, and are expected to remain, the main drivers of pilot demand.”

“Thousands of pilots have been furloughed in recent months. Many of them have pivoted to other professions and might not want to resume their pilot careers,” says the report.