Brazil’s Azul expects domestic leisure passenger revenue to exceed last year’s figures in the coming weeks as the airline prepares for a strong summer travel season in the Southern Hemisphere.

The Sao Paulo-based carrier says on 16 November that forward bookings for the period between end-of-year holidays and the first quarter of 2021 have returned to a level comparable to 2019, after the coronavirus brought aviation to a near standstill earlier this year.

By the end of the year, Azul plans to fly to 113 of its 116 pre-Covid destinations – 97% of its network. Executives say they will see more revenue from this segment in the coming weeks than in the same period a year ago. 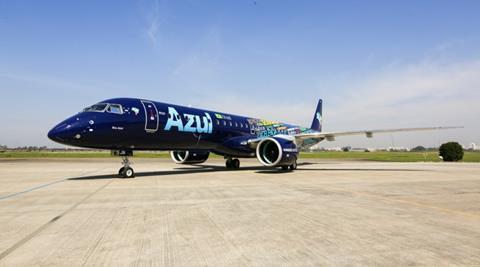 That said, the Sao-Paulo-headquartered airline lost R$1.2 billion ($220 million) during the third quarter, which ended on 30 September. Total revenue for the period was R$805 million, down 73% from the same quarter a year ago, but double the revenue from the second quarter.

Azul chairman David Neeleman says customer confidence in air travel is returning quickly in Brazil, and that Azul is uniquely poised to take advantage of that opportunity.

Prior to the coronavirus pandemic, Brazil, the most populous country in Latin America, was considered one of the most underserved air travel markets in the world. Per capita air travel was lower than in neighbouring Colombia, Mexico and Chile. But with a growing middle class that can afford to travel by air, Brazil’s passenger carriers have grown quickly in recent times, and are confident of the industry’s recovery.

The pandemic brought that growth to a screeching halt earlier this year, but both Azul and competitor Gol say they see signs of a strong recovery going into the Southern Hemisphere’s summer travel season, beginning with Christmas, and likely lasting through Carnival in mid-February.

“Brazil is still in a growth phase,” Neeleman says. “It is still an emerging market, [and Brazilians] need to travel more. There is no reason that a continent-sized country like Brazil cannot catch up to the other countries in the region.”

“We are going to double aviation in Brazil in the next decade,” he predicts.

Executives say the recovery is moving fastest among flights to and from the northeast of the country, where wealthy Brazilians who have not been traveling to Europe or North America recently are choosing to take high-end vacations.

Abhi Manoj Shah, the carrier’s chief revenue officer, says that the airline’s secondary destinations, rather than larger cities, are driving the airline’s recovery.

With leisure travel leading the way, the corporate segment is lagging, “but catching up”, Shah says. The corporate travel market in the country is fragmented, with some industries such as oil and gas returning more quickly than, for example, the financial industry.

He says Azul recovered 25% of its corporate travel at the end of October, and sees about 35-40% returning by the end of the year.

In August, Azul also commenced codeshare flights with LATAM in Brazil, a move that had been announced earlier this year. The codeshare has been implemented on 151 combined routes. That is more than Azul’s entire codeshare volume prior to the coronavirus crisis, executives say.

The airline also sees a great deal of potential in the cargo market, executives say, as cargo revenue during the quarter rose 40% compared to the year-ago period, Rodgerson says.

“This growth was driven by broad expansion in all segments of the cargo market, but especially in e-commerce,” he adds

Azul converted four Embraer E195-E1s into dedicated freighters, and depending on how the market develops in the coming months, could convert up to six more, Neeleman says.

“There’s an arms race in deliveries in the country. There’s a bunch of players running after the e-commerce space. Our network advantage is unmatched: we serve 113 domestic destinations and that makes a difference.”