This will also pave its way to becoming an IATA member in the near future, the carrier says. 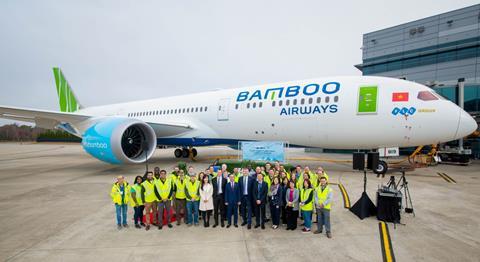 “Achieving IOSA certification is the most compelling evidence for putting safety factors first in the operation of Bamboo Airways. This will be one of the key factors for its progress towards [excellent] service, in line with the trend of new and modern aviation around the world,” says Dang Tat Thang, Bamboo’s vice president and chief executive.

The carrier launched in January this year and Cirium schedules data shows its first flights took off in March. It mostly services the domestic market but launched four international routes in October and November: from Cam Ranh to Seoul and Macau, and from Da Nang to Seoul and Taipei.

Cirium fleets data shows Bamboo operates 23 Airbus A320 family aircraft and received its first Boeing 787-9 Dreamliner earlier this month. It has on order one A320neo and nine 787-9s.

The carrier is targeting 30 aircraft by the first quarter of 2020, including four 787-9s, and hopes to expand its network to 25 international routes within the year.