Canada has named a new Minister of Transport in a cabinet reshuffle as the country’s airline industry continues to suffer from the effects of the global coronavirus crisis.

Omar Alghabra will replace Marc Garneau, a former astronaut who had been the transport minister since 2015 and is moving on to become the country’s minister of foreign affairs. 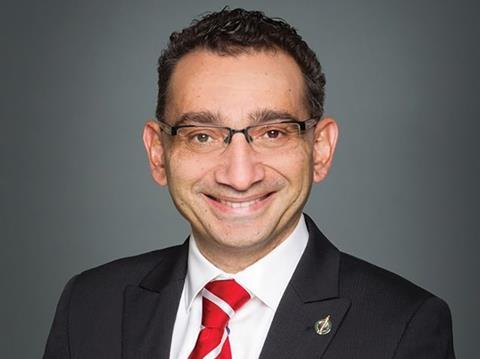 The National Airlines Council of Canada (NACC), which represents the country’s most major carriers, welcomes the new minister, but adds that Canada’s aviation industry is “in crisis” after the global health pandemic precipitated strict travel restrictions that remain in force.

“We are losing connectivity and service to communities across Canada at a rate that threatens to unwind billions of dollars in investment made over the past ten years that has supported hundreds of thousands of jobs and driven a level of connectivity and service that underpinned economic growth in every region of Canada,” says Mike McNaney, the lobby group’s chief executive.

“Decisions made by the federal government in the coming weeks and months will directly and forcefully impact the future of Canadian aviation, the future of our employees and the future of the communities we serve,” he adds.

The country’s airlines have been frustrated with the government’s path in attempting to stem the spread of the highly-communicable virus. In March, Canada imposed a 14-day mandatory quarantine for all incoming passengers, with steep fines, even jail time, for non-compliance.

Most of these requirements remain in effect today, almost ten months later.

The longest peaceful border in the world, between Canada and the USA, has also been effectively sealed for non-essential travel since 21 March. The closure was extended numerous times, and is now scheduled to end next week. However, with exploding case counts in both countries, that looks uncertain.

Last month, the Canadian government added a negative coronavirus test requirement to the quarantine rule for all arriving passengers. Airlines called the roll-out “chaotic” and “without coordination”, while industry organisation IATA said it was “callous and impractical”.

In addition, Canada has neglected to offer its aviation industry a sector-specific financial aid package such as the USA’s CARES act, which assisted carriers in keeping employees on payroll for several months. As a result, NACC says, Canada’s carriers are “losing market share to foreign competitors”.

Calgary-based WestJet said last week it had to lay off another 1,000 employees, about one-third of its remaining staff, and once again cut its capacity, in response to the new restrictions. Regional carrier Porter Airlines, headquartered in Toronto, said on 11 January that it will not restart operations until 29 March, more than a full year since it halted service due to the rapidly-spreading coronavirus.