China Airlines has disclosed record cargo revenues for 2021, as it doubles down on what it calls a “cargo-centric business model”.

For the full year, the Taiwanese carrier says cargo revenue surpassed NT$100 billion ($3.6 billion), the highest in its 62 years of operations. China Airlines also states that freighter revenue in December hit a single-month high of more than NT$15.4 billion. 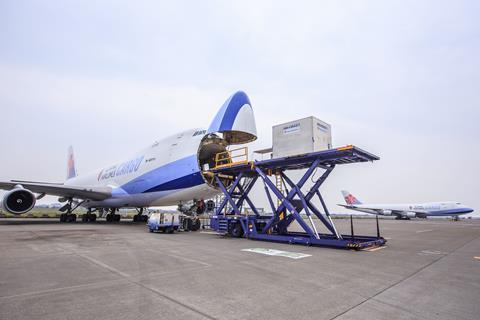 While it has yet to disclose its full-year earnings, the uptick in cargo takings is expected to help offset a collapse in passenger travel revenue amid the pandemic, and provide a lift to the carrier’s profitability.

China Airlines, along with compatriot EVA Air, swung back to profitability in the third quarter of 2021, amid a steady rise in revenue. In previous quarters, both carriers have pointed to a strong cargo performance as a key factor in boosting their earnings.

“China Airlines will continue to focus on its cargo operations, closely monitor developments in the passenger market, and carefully review its passenger market strategy, as it works to maximise its operational profits,” the carrier adds.