Cathay plunges to record HK$8.7 billion loss in ‘most challenging’ first half

Cathay Pacific Group reported a staggering operating loss of HK$8.7 billion ($1.13 billion) for its half-year financial results, in what its chairman called the “most challenging” period for the group in its 70-year history.

Cargo proved to be the sole bright spot for the troubled group, which in recent months was the subject of a government bailout, with revenue for the segment reporting the only year-on-year increase.

The group’s operating loss for the six months ended 30 June was in stark contrast with a year ago, when it reported a half-year operating profit of HK$2.47 billion.

It reported a net loss of about HK$9.9 billion, reversing the net profit of HK$1.35 billion it reported in the first half of 2019.

In July the group said that expected a net loss of about HK$9.9 billion, on the back of a disastrous first half of the year that saw passenger travel demand plunge from the coronavirus outbreak.

Cathay group chairman Patrick Healy notes that the group had a “promising start” in January, but that quickly dissipated in the subsequent months, as the pandemic quickly spread across the world.

In monthly traffic figures that followed, Cathay consistently warned of a material financial loss for its half-yearly results, as it slashed capacity, conserved cash, and struggled to stay afloat. In June and July, the carrier has gradually added capacity back to its network.

It also said in June that it was losing HK$2.5 to HK$3 billion in cash a month since February, when the coronavirus outbreak became more widespread. In July, that figure went down to HK$1.5 billion a month, and is expected to remain at that level for the foreseeable future.

“[The] first six months of 2020 were the most challenging that the Cathay Pacific Group has faced in its more than 70-year history. The impact of Covid-19 on the group’s business and the global economy is unprecedented. The global health crisis has decimated the travel industry and the future remains highly uncertain, with most analysts suggesting that it will take years to recover to pre-crisis levels,” says Healy. 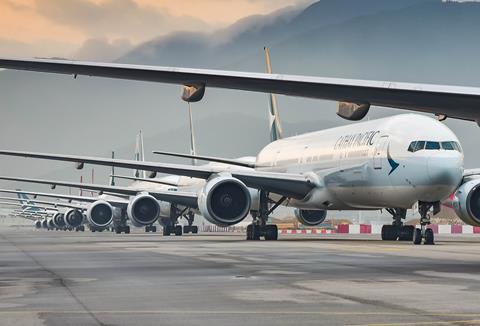 In June, the group received a financial lifeline from the Hong Kong government, as part of a HK$39 billion recapitalisation plan. Cathay’s management will also re-evaluate its business model in the longer term, and will, by the end of the year, make recommendations to its board on the “optimum size and shape” of the group.

Says Healy: “Inevitably, this will involve rationalisation of future planned capacity compared to pre-crisis plans, taking into account the market outlook and cost structure at that time.”

Cathay in July also disclosed that it will defer delivery of its Airbus aircraft by up to two years, and was in “advanced negotiations” with Boeing about delaying the delivery of the 777-9 widebody, in a bid to “produce cash savings” in the short to medium term.