An Irish High Court has cleared Irish regional carrier CityJet to leave the formal financial restructuring process it entered in April as the coronavirus crisis struck.

CityJet entered Examinership - a process in Irish law under which companies can protect themselves from creditors while they restructure - on 17 April. 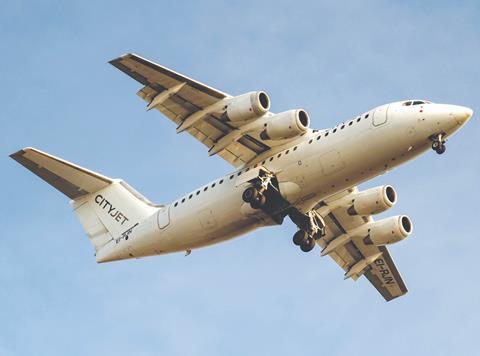 “After almost four months, CityJet today exited the Examinership process and, although much smaller than before, we now have a solid business upon which we can continue the development of the airline and seek to grow again as the market recovers,” says CityJet chief executive Pat Byrne.

The Irish Times reports the slimmed down CityJet will have around 140 positions - compared with 400 roles before the crisis.

”The process of Examinership and the necessity to resize the business regrettably came at a significant personal consequence for many and our thoughts go out to the many loyal and committed colleagues who sadly have lost their jobs with CityJet,” says Byrne. ”I sincerely hope, as the company finds new opportunities, that we will once again be able to provide increased levels of employment.

”I also must acknowledge the support of others without whom our emergence from Examinership would not have been possible, including our trade partners, creditors, suppliers, aircraft lessors and financiers and our shareholders; also Kieran Wallace and the team at KPMG.” The latter served as the carrier’s examiner during the process.

”With Examinership behind us, CityJet is now very well positioned to play a key role in the re-emergence of the European regional aviation industry,” adds Byrne.

CityJet has focused on its wet-lease business since ending scheduled passenger flights in its own right in the winter of 2018, including contracts with Aer Lingus and SAS. It had also been working on a planned merger with Spanish regional carrier Air Nostrum, which was close to completion before the pandemic hit.