KLM chief executive Pieter Elbers insists the carrier is continuing discussions with the Dutch government over the approval of its bailout deal, amid reports that the airline’s proposals have been rejected.

“We still need to finalise the debate with the government and get their endorsement of the full plan,” Elbers says on Air France-KLM’s earnings call today.

A key remaining discussion point is “whether the duration of the union agreement – up until 2022 – is long enough or whether it should be longer”, he explains.

Elbers’ comments follow a Reuters report claiming that the government had rejected KLM’s plan because of “a refusal by unions to commit to wage freezes through 2025”. 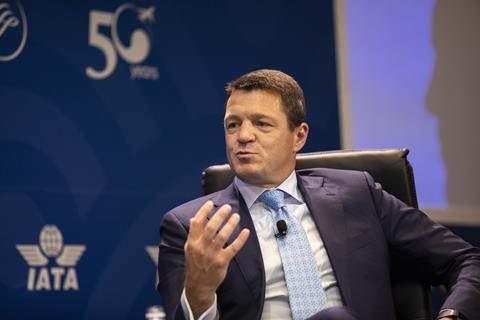 Elbers says talks with the government are continuing

The airline chief states, however, that KLM is ”confident on the trajectory we’re on” with the talks, adding: “We’ll continue to do that in the next few days.“

Despite the outstanding issues, Elbers is keen to highlight progress made during talks with the government since KLM submitted its restructuring proposals in early October.

KLM accepts “that the restructuring and the adjustments of the organisation are not going to be done overnight”, Elbers notes.

In order to secure €3.4 billion ($4 billion) in state loans and guarantees amid the impact of the coronavirus crisis, KLM needs to reach an agreement with the Dutch government on plans to cut pay, reduce jobs and slim down its fleet.