Hainan makes leap back to profitability in 2021

For the year to 31 December 2021, the carrier posted an operating profit of CNY3.5 billion ($530 million) - a significant improvement from the record CNY71.6 billion operating loss in 2020. 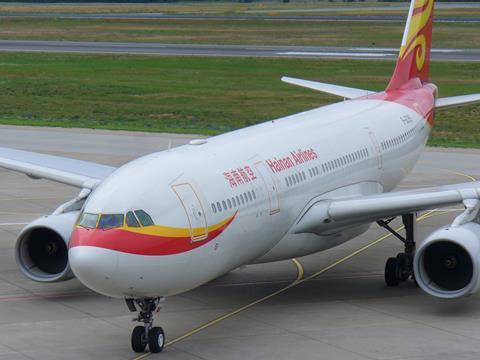 Hainan, which in January completed business restructuring, reported a 16% year-on-year increase in revenues to CNY34 billion, while costs fell 9% to CNY46 billion.

Hainan’s full-year earnings contrast with that of China’s three largest carriers, which were all loss-making in 2021.

Liaoning Fangda was selected last September as the embattled HNA Group’s strategic investor, paving for it to be the controlling shareholder of the group’s aviation businesses.

Despite improved financial performance in 2021, Hainan warns that it was far from being out of the woods.

Revenue for the three months to 31 March fell 18% year on year to CNY6.4 billion, as China battles a wave of infections caused by the more contagious Omicron variant. Costs, meanwhile, fell only 9% to CNY10.2 billion.

The airline also widened its net loss for the quarter, at CNY3.6 billion, compared to CNY2.6 billion a year ago.