Hong Kong start-up Greater Bay Airlines has received its first Boeing 737-800, as it works towards an imminent launch.

The aircraft, registered B-KJA, arrived in Hong Kong on the afternoon of 7 September, after flying from Hamburg via Nur-Sultan in Kazakhstan. 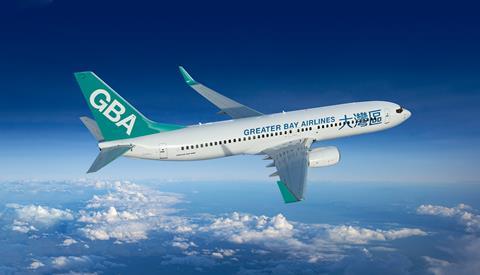 Cirium fleets data shows the aircraft was delivered to Norwegian Air as EI-FVM in 2017, before it was parked in Budapest in March 2020. The aircraft, currently managed by ICBC Leasing, was then ferried first to Guangzhou, then Hamburg, before delivered to Hong Kong.

The fledgling carrier in January applied to operate to more than 100 destinations in Mainland China, as well as Northeast and Southeast Asia.

The airline has picked Singapore, Bangkok and Phuket as its initial destinations, which it hopes to launch by the fourth quarter of the year.

The carrier is also working to secure its AOC, which reports indicate could come as early as 17 September. Concurrently, it is working to obtain a operating licence from the territory’s Air Transport Licensing Authority (ATLA).

Greater Bay Airlines needs to obtain both an AOC, as well as the ATLA licence to formally commence operations.

A report from the South China Morning Post, citing company sources, says plans for a 1 October launch — in time for China’s National Day celebrations — were at risk of being upended.

This was due to a closed-door inquiry from ATLA set for December, to consider its submissions and that of its rivals Cathay Pacific and Hong Kong Airlines, according to the report.