IAG has agreed to loan Air Europa parent Globalia €100 million ($111 million) over seven years in a deal that gives the pan-European group exclusivity on rights to purchase the Spanish airline.

An earlier agreement for IAG to buy the whole of Air Europa’s share capital fell through last year amid European Commission competition concerns, but IAG has since insisted a deal was still possible on fresh terms.

“We remain convinced about the strategic importance of this deal to the development and competitiveness of Madrid’s hub,” said IAG chief executive Luis Gallego as the loan proposal was announced today. “Since we started negotiations, the world has changed.

“This agreement will give us time to evaluate with exclusivity alternative structures that may be of interest to both companies and offer significant benefits for their customers, employees and shareholders.” 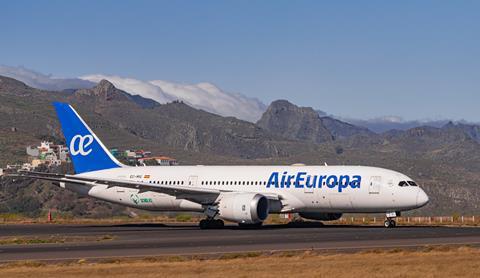 The proposed loan agreement will provide for “a period of exclusivity of one year while discussions take place” on the purchase of Air Europa, IAG says, plus a right for the group to match any third-party offers for the airline in the next three years.

IAG and Globalia also have a right to exit the agreement should the latter sell Air Europa at any point in the future.

IAG further notes that subject to relevant regulatory approvals, it will have the option to convert the loan into a stake of up to 20% in Air Europa.

In late February, Gallego said that Air Europa had been talking to other airlines about a potential sale, describing the move as “a mistake” on the Spanish carrier’s part.