Hong Kong’s widespread anti-government protests are taking a “significant” and “unprecedented” toll on the city’s aviation sector that has led IATA to urge its authorities to provide financial relief for the sector.

Hong Kong’s widespread anti-government protests are taking a “significant” and “unprecedented” toll on the city’s aviation sector that has led IATA to urge its authorities to provide financial relief for the sector.

In its latest research, the trade body raised the red flag on the ongoing unrest, which is well into its fourth month, saying that it has had “significant impact on air passenger traffic flows in one of the region’s main airline hubs”.

In terms of year-on-year growth, passenger departures from Hong Kong saw a drop of more than 15% in August, which IATA says is a “steep decline that is almost unprecedented for major markets”.

Airlines’ scheduled seats are also showing a downward trend in the later months of the year, though IATA says that the size of reduction indicates “the downturn is expected to be of a temporary nature”. 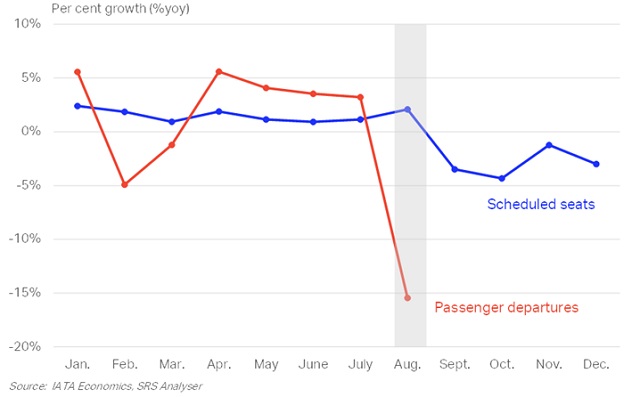 Still, it warns that "any further prolongation of the disturbances may induce airlines to more drastically change the amount of services, either in terms of seats and/or frequencies." Cathay Pacific, for one, has adjusted capacity for its winter schedule in anticipation of weakening demand.

To this end, the aviation body is urging the Hong Kong government to step in with financial assistance.

“Maintaining aviation connectivity is critical to Hong Kong. The government should consider financial relief measures to support the 330,000 jobs and 10.2% of GDP dependent on the aviation and tourism sector,” IATA says.

IATA’s ominous report comes days after Cathay Pacific released traffic figures for what it called a “challenging” September. The airline and its subsidiary Cathay Dragon saw decreases in traffic for the month, with passenger load factor dropping 7.2 percentage points year-on-year. It also carried less passengers for the month, and saw inbound traffic fall a dramatic 38%.