JetBlue Airways expects second quarter capacity to be 15% lower than during the same period in pre-coronavirus 2019, as the airline gears up for progressively higher demand amid rising vaccination rates.

The New York based carrier says in a filing with the Securities and Exchange Commission on 9 June that it is seeing “continued improvement in bookings”, and now expects revenue during the quarter to be “between 30% and 33%” lower compared to 2019 figures. 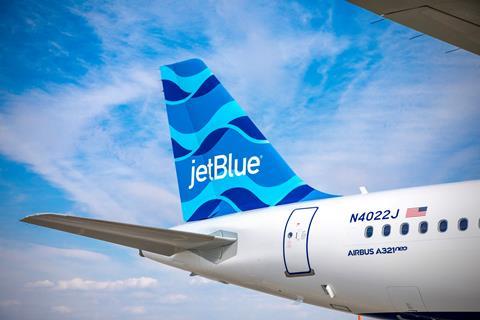 “This range compares to the company’s prior planning assumption of a revenue decline between 30% and 35%, year over two,” the airline says. “JetBlue continues to believe demand and revenue recovery may be non-linear and may not be able to predict changes to revenue due to additional Covid-19-related disruptions or other factors.”

JetBlue’s second-quarter costs will likely fall 7% compared to 2019, as compared to the previous assumption of an 8% decline, the airline adds.

JetBlue adds to the chorous of airlines which have said in past weeks that domestic demand is rising faster than expected, with most planning to fly a full schedule during the busy sommer holiday travel season.

Last month, JetBlue announced the launch of daily flights between New York’s John F Kennedy International airport and London Heathrow beginning on 11 August. A daily flight from JFK to London Gatwick will commence on 29 September, with service from Boston to London to begin next summer.

JetBlue will be the first major airline to launch transatlantic service in a narrow-body aircraft. It took delivery of its first Airbus A321LR for this purpose in April.