JetBlue Airways has sweetened its offer to purchase Spirit Airlines by agreeing to pay a $350 million fee if regulators torpedo the deal due to antitrust reasons.

New York-based JetBlue has also agreed to pre-pay that termination fee to the tune of $1.50 per share to Spirit stockholders, or about $150 million, JetBlue says on 6 June.

That provision brings to total value of JetBlue’s offer to $31.50 per share of Spirit’s stock, or about $3.4 billion. 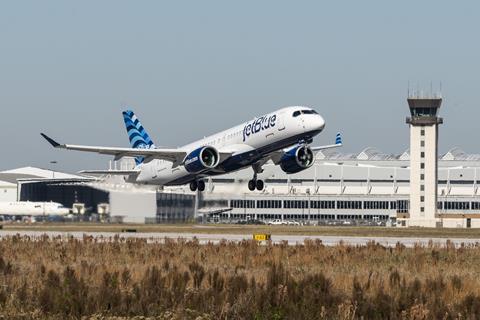 A JetBlue Airbus A220

The move is JetBlue’s latest effort to convince Spirit’s board of directors to endorse JetBlue’s offer over that of competing suitor Frontier Airlines.

Spirit’s board has thrown its support firmly behind Denver-based Frontier on grounds that JetBlue’s proposal would be unlikely to clear regulatory scrutiny.

Frontier offered in February to purchase Spirit, based in Florida, for about $2.3 billion in cash and stock. Frontier has since bolstered its offer by agreeing to pay a $250 million fee if regulators block the deal.

JetBlue countered in April with an offer of its own, proposing to buy Spirit for $33 per share, or about $3.6 billion. After Spirit’s board rejected that deal, JetBlue cut its offer to $30 per share but agreed to pay a $200 million fee if regulators fail to approve the combination.

JetBlue has now upped that fee to $350 million, of which it has agreed to pre-pay $150 if Spirit stockholders approve the plan.

The airline calls its offer a “demonstrably superior value” to the terms of Frontier’s proposal.

JetBlue is also now trying to enlist support from Spirit’s employees. On 6 June, JetBlue released a letter to Spirit staffers from JetBlue chief executive Robin Hayes. The letter says JetBlue offers “higher pay and better benefits than either Spirit or Frontier, adding that “a combined JetBlue and Spirit will grow and add more well-paying jobs”.