Low-cost airline pioneer and founder of Southwest Airlines Herb Kelleher has died at the age of 87.

“Herb was a pioneer, a maverick, and an innovator,” says the airline.

“His vision revolutionised commercial aviation and democratised the skies. Herb's passion, zest for life, and insatiable investment in relationships made lasting and immeasurable impressions on all who knew him and will forever be the bedrock and esprit de corps of Southwest Airlines.”

Kelleher co-founded the company in 1967. After four years fending off legal challenges from full service carriers, Southwest Airlines started operating internal Texas flights from Dallas Love Field in 1971. Today, it is the archetypal low-cost carrier and one of the world's most consistently profitable airlines.

Kelleher served as president and CEO of Southwest for 20 years until 2001, and was executive chairman from 1978. He stepped down in 2008, and served as chairman emeritus until his death.

Herb Kelleher on the cover of Airline Business in 1999 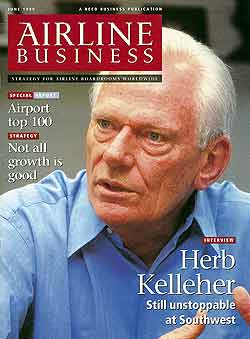 Southwest pioneered a point-to-point business model that eschewed the hubs used by major carriers. It also stuck with a single fleet type, the Boeing 737, to simplify logistics and crewing. Its no-seat-assignment policy facilitated 20 minute turnarounds. Subsequent low-cost airlines have drawn greatly from Kelleher’s legacy at Southwest.

In a 1999 interview with Airline Business, Kelleher made a remark that anticipated the success of low-cost carriers in Europe.

"It would not be possible in Europe to replicate Southwest exactly, to make a clone of Southwest, because you have different problems and circumstances, such as union issues," he said.

"But you can achieve what Southwest has achieved in the USA. Europeans have said to me that this is not possible because passengers will insist on being served fine meals with fine wines and baked Alaska. Well, we went through the same game in Texas; people gave the same reasons why it couldn't be done here."