The email landed in Asia-based lessors’ inboxes in the early hours, inviting a maximum of three people per lessor to a 3 June call with Lion Air Group’s billionaire co-founder Rusdi Kirana.

“Rusdi will update you of the general status and other matters,” the email, seen by Cirium, stated. Lessors, who received less than 24h notice of the meeting, were told to bring their lawyers. 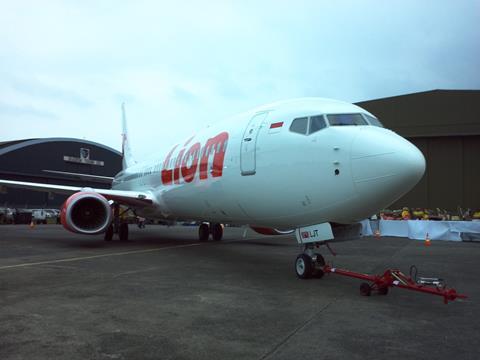 The summoning came 15 months into long and sometimes painful restructuring negotiations, during which the airline group, it says in the email, reached in-principle agreements with the “vast majority” of its lessors. It adds that while the impact of the pandemic “continues to be significant and unprecedented”, Lion Air Group “has assessed the viability of its business and remains committed to its continuation”.

Lion and its Singapore-based in-house lessor Transportation Partners (TP) have been managing the negotiations with lessors, led by Kirana’s daughter Dea, along with Glenys Kirana and Rebecca Cox, the lessor’s general counsel.

Valerie Tay, who served as chief financial officer and with whom lessors had previously been dealing, left TP in April after nearly nine years of service and was not directly replaced.

Dea, Glenys and Cox have generally favoured round-robin emails followed by bilateral negotiations, rather than town halls. Kirana himself has had bilateral discussions with some lessors, but a mass address from the co-founder was something uncommon, lessors remarked.

During the 3 June virtual meeting, Kirana dismissed rumours that he planned to shut down Lion Air and focus instead on Super Air Jet (SAJ), a new Indonesian airline in the process of applying for its air operator’s certificate, according to four people who joined the call.

A second person adds: “Certainly, Rusdi spent a lot of time getting the point across that Lion Air was not going out of business and Super Air Jet was there for the benefit of Lion Air, and the primary purpose of Super Air Jet was to make Lion Air more competitive so they could pay off the huge debt to the lessors.”

Lion and TP last year proposed repaying arrears from the proceeds of an initial public offering to be conducted between now and 2027. Lessors viewed that approach with scepticism, given that by 2027 Lion would have been talking about an IPO for 23 years.

Lessors are in the process of negotiating to lease new aircraft into SAJ. Many in the industry have noted the cognitive dissonance of doing business with SAJ while Lion pays little or no rent, but the glut of aircraft in the market amid the pandemic has made lessors less choosy.

“In a normal world, nobody would be touching Lion with a barge pole,” says a person involved in the negotiations.

“But [it’s different] when you’ve got a whole lot of aircraft returned and new ones coming in on your orderbook and you’ve got to find homes for them.”

Besides reassuring lessors about Lion’s longevity and allaying their concerns about SAJ, the call’s other purpose was to update lessors on legal action in the UK and France that Lion Air Group expects may impact French entities used by some of its lessors.

Lessors were given just over two weeks from the date of the call to decide whether they want to restructure aircraft leases that pass through Lion-controlled entities in France.

“It’s just crazy telling us now you have X-number of days to do this – not just to think about it, but complete it,” one of Lion’s lessors complains.

Another says: “It was unrealistic to think that all of this was going to happen in two weeks.”

When leasing aircraft into Indonesia, it is common to use a lease-in lease-out (LILO) structure for tax purposes, lessors to Lion tell Cirium.

A 3 May 2019 briefing paper from law firm Bryan Cave Leighton Paisner explains: “To mitigate withholding tax, typically the leasing of aircraft and aircraft engines by an Irish lessor to an Indonesian aircraft operator is transacted through a lease-in-lease-out structure using a French socit par actions simplifiee [SAS] intermediate lessor to take advantage of the Ireland/France and France/Indonesia double-taxation treaties.”

Some of the entities concerned are Terra Aviation Network SAS (TAN) and Ciel Voyage SAS (Ciel), both French entities.

Cirium understands that multiple aircraft pass through TAN, Ciel and related entities, including some of the aircraft Goshawk leases to Lion Air Group. Some other lessors’ aircraft leased to Lion are structured through societe a responsabilite limitee (SARL) entities. Those deals will not be affected by the legal action involving TAN and Ciel, Cirium understands.

Lessors to Thai Lion are also unaffected, as the Ireland-France-Indonesia LILO structure does not apply to aircraft leased into Thailand.

The 3 June call forced lessors and their lawyers to scramble to gather as much information as possible on the pros and cons of restructuring their French leases.

A lessor to whom Cirium spoke on 7 June was weighing up with their lawyers the potential tax and legal risk of moving the aircraft to a new SPV against the risk of keeping them in the old one.

Lion and TP held a follow-up call aimed at lawyers on 4 June to discuss the matter in more detail. An additional call was held on 7 June.

“This is all done in a rush, and in a hurry, and in a panic,” one person involved says.

Things have changed rapidly over the past week.

A person whose aircraft is in one of the affected entities told Cirium on 9 June that Lion and TP had suggested lessors could sign a short-form letter of agreement referencing the lease amendment and restructuring agreements that some lessors have agreed in principle with the group.

This document would state that the terms of lessors’ lease amendment and restructuring agreements would remain in effect when the aircraft transfer out of the French SPV companies.

“And then after that, you come up with a new fully-fledged lease agreement,” the person adds. “It would almost be a novation of the original agreement over to this new SPC, or maybe even draft a new agreement – it wasn’t clear – we don’t know – because we never got there.”

Two days later on 11 June, the situation had changed. Lion and TP were now seeking to formalise in-principle agreements, while taking the risk of keeping the aircraft in the affected SPVs.

“It was highly unlikely that all of these lessors… were going to transition a few hundred aircraft,” says the person. “Every aircraft is in a unique structure. They’re all single-aircraft transactions that are done these days, so to transition all those over will be a nightmare in such a short period.”

Another lessor confirms that Lion is trying to firm up in-principle agreements with lessors.

“[Their general counsel] went around and asked all the lessors to reply by email whether, generally, are you in agreement on the restructuring discussion agreement that we had [the in-principle agreements] and you confirm this by email, and basically they will follow up with documentation later on,” the person says.

“They have so many handshakes with other lessors on the agreements, but they haven’t got down to documentation with them, so I think they are already behind time on that.”

A third lessor has been wanting to firm up their handshake for a long time. “We’re a big company. We have shareholders. We can’t just tell them we had a handshake deal – what does that mean?” the person says.

Transferring the aircraft in the French SPVs within such a short time frame was always a non-starter, in this person’s view. “Ignoring the substance of it, just the practicality of it, is just absurd,” they say.

In the negotiations, certain “friendly” or “green-list” lessors have been more willing to work with the group than others.

The 3 June call was attended by the green-listers, attendees say, while at least four on the “red list” – ACG, Goshawk, Minsheng and SMBC Aviation Capital – have formed their own Lessor Working Group and appointed Borrelli Walsh, a Kroll company, to assist with the negotiations.

One person who has Lion exposure but was not invited says the meeting was “really with those lessors with whom they either have signed restructuring agreements or agreements in principle for restructuring”.

What happens with the aircraft belonging to red-list lessors will partly depend on the result of the legal action in the UK and French courts.

“My own opinion is Lion Air has tried its best to restructure all the leases considering the incredible pandemic that is affecting every airline in the world,” one of the green-listers says, adding, of Kirana: “What he has done to date is pretty reasonable.

“Now, he has changed the goalposts a few times, but that’s because we keep on getting new waves [of Covid-19]. Every time there was a new wave, the situation changed, so I think Lion Air has been reasonable, considering.”

But one red-lister disagrees, saying the situation is not fair on other airlines paying as much rent as possible and striving to make good on their arrears.

“I think it creates a really challenging precedent for the industry if they are allowed to get away with what they are trying to do,” the person says.

“Do you allow an airline to behave like this and get away with this type of thing?”