A Canadian union has floated the idea of re-nationalising legacy carrier Air Canada in light of the “disheartening impact” of the coronavirus pandemic and the government’s lack of support for the industry.

The Montreal-based airline’s machinists’ union, the International Association of Machinists and Aerospace Workers (IAMAW), on 20 October sent a letter to the country’s ministers of transport and finance asking to discuss returning the airline to government ownership. The letter cites “unparalleled devastation” of the industry. Air Canada was privatised in 1988.

”We now recommend a debate on the re-nationalisation of Air Canada,” the union writes. 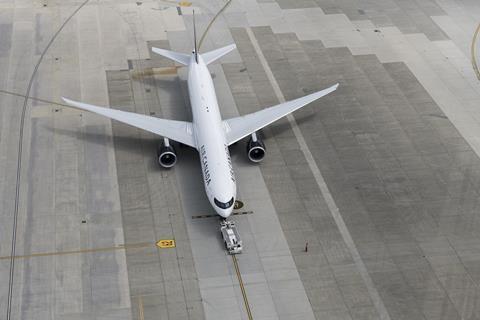 “It is long past time for the federal government to step in and prevent our crucial air transportation industry from collapsing in the midst of this global pandemic,” the union says. “We are calling for investment in the industry, particularly as it impacts upon Air Canada and the tens of thousands of Canadians who rely upon this company for their income and their livelihoods.”

“Having a rich and viable airline is key to Canada’s infrastructure; having good middle-class jobs as part of that equation is equally vital,” the union adds.

But a trade group representing Canada’s largest passenger carriers said on 19 October that loans and loan guarantees would be more useful than a government takeover.

The Air Transport Association of Canada, a trade organisation that represents smaller and regional passenger carriers, fears members may be left out if the country’s largest airline receives special treatment. “The government needs to support not one airline. It needs to support a whole bunch of airlines that offer regional service,” the group’s president John McKenna said recently.

Canadian governments imposed strict lockdowns and travel restrictions to stop the spread of the highly-communicable virus earlier this year.

But unlike in the United States, Canada did not offer its air transport sector an industry-specific financial assistance plan. Canadian carriers have laid off thousands of workers in recent months.

The machinists’ union is calling on the Canadian government to invest in the airline, citing Germany as an example. There, the government stepped in to support Lufthansa Group earlier this year, taking a 20% stake of the company in exchange for a €9 billion ($10 billion) financial support package.

“We oppose any contributions being used to pay for executive bonuses or other forms of executive compensation,” IAMAW writes. ”Over the past six months, we have watched as more than half of [our members] working for Air Canada have been laid off or otherwise furloughed.”

”Any federal government recovery plan must consider the needs of those workers and must ensure they continue to be employed in strong working-class jobs. These workers built Air Canada. We intend for them to be there to rebuild it,” the union adds.

Since March, Canada has had a 14-day mandatory quarantine requirement for all inbound passengers, including citizens. Domestic, inter-provincial travel also continues to be difficult amid a complex web of requirements that hinder free movement without subsequent self-isolation.

The border to the US, the longest peaceful national frontier in the world, has been effectively sealed to non-essential travel since 21 March. This closure has been repeatedly extended, most recently to 21 November.

As a result, Calgary-based WestJet said last week it was indefinitely suspending flights to far-eastern Canada, leaving the provinces of Atlantic Canada with fewer air-travel options.

The union argues that airlines in Canada offer a critical public service, especially considering the size of the country, which spans six time zones.

“Canadian citizens in all communities must have access to this resource, and it is incumbent upon us all to ensure this service is reinstated and maintained,” the union says. “We must also consider the smaller airlines across the country, all of whom have suffered significant losses.”

Vacation specialist Air Transat shuttered operations for several months during the northern hemisphere’s early summer, and only resumed flying on 23 July. As a result, it saw a 99% decline in revenue for its fiscal third quarter. Sunwing, which targets Canadian holidaymakers travelling to warm-weather destinations, also halted operations in April, and said earlier this month it will begin flying again on 6 November.

Toronto-based regional carrier Porter Airlines, which maintains a network of 19 destinations in eastern and central Canada and the USA, last week delayed its post-coronavirus restart for the sixth time, citing ongoing uncertainty and travel restrictions.